Granny Muffin or The Widow Chambers?

It's not quite 'Little House on the Prairie,' but Davis resident Ruth Chambers has penned a family-friendly book, 'The Weight of Gold,' an adventure that takes readers through the excitement of the California Gold Rush with the Widow Chambers.

It's not surprising that her first effort is steeped in history, since the former Granny Muffin of Davis Community Television fame volunteers in Old Sacramento, helping visitors relive what life was like around here 161 years ago.

Chambers arrived in Davis from Los Angeles in 1994, after the death of her father, for whom she had been the only caretaker - day and night - for more than two years following his stroke. Before her dad's setback, Chambers was in civic theater, producing shows while working as a newspaper photographer.

Following her father's death, she had to ask herself what she was going to do now...

'My friends were leaving Los Angeles. They were middle-aged people who were leaving for a better life somewhere else. So I started going to where they had gone.'

Her travels took her first to San Luis Obispo, which she decided was too upscale. Next, she pushed on to Davis.

"I got here at midnight and I looked around, like an L.A. person does. I cased the joint in 15 minutes. It had trees. It was quiet. I liked it. So I wrote down the name of a Realtor, went home, called her the next day and said 'Find me a place to live.' She did ... I put my stuff in a van and I moved."

Chambers lost no time in making a name for herself. The name was Granny Muffin.

A woman of indeterminate age, with bright red hair, Granny wandered around Davis in her bib overalls, put on puppet shows at the Farmers Market, drove a car covered with Astroturf (dozens of tiny figurines decorating the dashboard), and hosting 'Granny Muffin Reads' in the early days of Davis Community Television (DCTV).

'Ruth is a lively woman who puts her full heart into all that she does,' says Kari Peterson former executive director of DCTV.

'(Community television) was the perfect platform for her talents. She produced shows, she helped others with their shows, and she was out on the street with a camera to cover anything, any time. She had a ball. She's generous, funny, very multi-talented and has crazy, unbounded energy.'

Her unbounded energy led her to Old Sacramento and the Living History Program.

'I thought I could do a little street thing somewhere on a corner, a puppet show of some kind because I was already doing puppet shows here in Davis. I went to Old Sacramento because I knew they had street entertainers. But you have to wear something evocative of the period, so I had a dress made by someone who knew what she was doing and then I heard about the Living History program. I started going to the meetings and there were all these people dressed up like 1849 people and I just kind of got into it. It was wonderful.

'Sometimes there's a path for you and you don't know it until you're actually on it. It's just interesting that way. I now do a Gold Rush puppet show. I do it anywhere, but mostly out of the Sacramento History Museum (on I Street, adjacent the Sacramento River).

'I cover the Gold Rush period all the way through the Transcontinental Railroad, so it's not your usual puppet show - it's history.'

As she got into her role, she became even more authentic and made her own dress - by hand - without the use of a sewing machine.

'I started with an apron, no pattern (the women of that period had no patterns). It took me six hours. I thought well, that's not that bad. I can make a dress. I have time. It took me 32 hours to do the dress and the apron...'

Now she's working on her third dress - 'Because I'm an idiot,' she laughs - though she points out that most women of the era only had two dresses.

'Can you imagine only having two things to wear? That's smelly. But they were smelly people.'

Her work with the Living History Program has now led Chambers to write her first book, 'The Weight of Gold,' which is available at the Sacramento History Museum and locally at The Avid Reader.

The heroine of her story is the Widow Chambers, who travels to California from New York with her husband - only to endure his death en route. Cholera was the culprit: 'It was very typical of the time. (Cholera took) forty percent of the people who died on their way to California,' she explains.

'That leaves me a widow who (had) to support herself. When I get to Sacramento it's mostly young men between 18 and 24, very few women, and of course I'm too old to be marriageable.

'I already have grown children back east, so I start gathering berries in the foothills and making fruit pies and selling them on the street, which is one of the ways women could make a living back then."

Chambers explained that women could not own property during that period, so a woman couldn't buy a farm.

'You'd have to get a man to own it and then you'd rent it from him. So then I come up with this pie thing because I didn't want to do the other things, and probably because I was kind of feisty because of my life with Mr. Chambers.

'The women back then were supposed to shrink back, but because Mr. Chambers and I supported ourselves together with the Chambers Street Theater, I was used to maneuvering a bit. So I started this pie business, building my own outdoor oven.'

As she discusses the book, the line between Ruth Chambers, author, and The Widow Chambers sometimes blurs. But her enthusiasm for bringing back stories about the Gold Rush folks who didn't go searching for the percious metal but supported the rush back in Sacramento, is strong and her book is replete with bits of homespun information rarely found elsewhere.

Unable to find a publisher for her book, Chambers self-published the effort and has been its one-woman marketing firm.

'I wanted my book to be a family book (like) all of my TV and radio stuff was,' Chambers says, adding she's distressed by what she sees when families fall apart. Her book is something parents and kids can read together.

'Everything I've been doing for the last 20 years is trying to get families together. Here's an opportunity to read together."

She is now working on a sequel, still excited about sharing tidbits with her audience.

'Ruth enters your life in a big way, and smiles and laughs all the way through. What's not to love?' Peterson says. 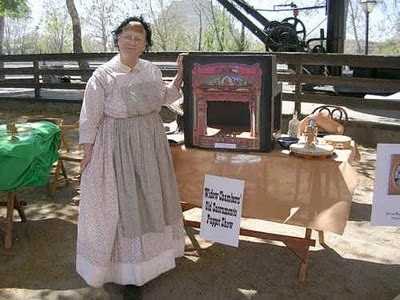