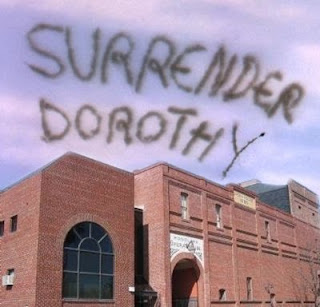 It's a brave thing to take an iconic movie such as “The Wizard of Oz” and put it on the stage, especially when the script is almost verbatim what people know from the movie.

But the Woodland Opera House has created a delightfully enchanting production, directed and choreographed by Jason Hammond (who also designed the sets), with musical direction by Jeff Poppings.

Danielle Hansen is not only a wonderful actress and singer, but she managed to stay in character, and not miss a note or a word of dialog while all the while dealing with a Toto who was determined to upstage everyone, and even attack a couple of the other actors.

Hansen handled Bella the pup skillfully, taking her offstage when her barking threatened to drown out everyone else, and still gave us a Dorothy who was sweet, innocent and full of hope and wonder. Congratulations, Danielle — it was a memorable performance.

Dorothy's companions on her travels around the land of Oz could not have been better cast. Matthew Kohrt as the Scarecrow is thin and floppy and his dancing was every bit as delightful as Ray Bolger's in the film.

Eric Alley, in his “dream role,” is a noble Tin Man, with a big voice and a big heart in his empty chest.

Erik Catalan, sharing the stage with his daughter, Munchkin Naomi, is just plain fun as the Cowardly Lion.

Angela Frost Baltezore is returning to the Opera House stage after a 35-year hiatus (during which time she managed to win 15 Elly awards for performances elsewhere) to play both Aunt Em and Glinda, both roles played well.

Patricia Glass, last seen in Woodland's “Noises Off,” is the Wicked Witch of the West and has great fun chewing up the scenery, though her performance is not enough to scare the little children in the audience.

Dennis Updegraff does an OK job as Uncle Henry, but he really pulls out all the stops as the Oz Guard.

James C. Glica-Hernandez emerged from the orchestra pit to play only his second on-stage role in 20 years, yet acquits himself well as Professor Marvel and The Wizard of Oz.

Members of Woodland's Young People theater program do an outstanding job as Munchkins and those who have larger roles, particularly Riley Spieler as the Munchkin Mayor and Bailey Robinson-Bermester as the Coroner, give highly polished performances.

Hammond's choreography is perfect, especially in “Ding Dong, the Witch is Dead” and “The Jitterbug.”

The scenery is brightly colored and cleverly designed to give the impression of magical entrances and costume changes ... and it worked beautifully, particularly in transforming an overalls-clad farm girl to a pinafore-wearing Oz girl.

Not surprisingly, Laurie Everly-Klassen's costumes were wonderful. It must be such fun to design a show that has so much fantasy about it.

There are a few special effects that work better on film (such as the exposition of the Wizard), but basically most come off quite well. I loved the departure of the balloon.

Small children in the opening night audience loved the show. Adults loved the show. For those familiar with the movie, it will be fun to hear the songs as they were originally written, complete with the verse that precedes the better known choruses. It was also fun to have “The Jitterbug,” cut from the movie, included.

If Bella learns to stop attacking her fellow actors and to listen instead of barking all the time (or leaping up on Dorothy to get a treat) this will be a much more enjoyable show, but kudos to the cast and crew for dealing with her in such a professional way.