It's a Grand Night for Singing 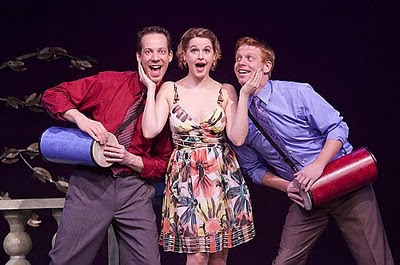 If you want a good-looking, Broadway-worthy cabaret show, get someone with Broadway experience to create it for you.

Mindy Cooper - director for Sacramento's Cosmopolitan Cabaret's 'It's a Grand Night for Singing' - has brought her Broadway experience to Sacramento.

'A Grand Night for Singing' has a classy feel to it.

The simple set, designed by Jamie Kumpf, has enough pillars and platforms combined with cool-colored lighting by Sally Slocum and a winsome cast. Add Chris Schlagel at a grand piano, and you have a production that's undeniably appealing.

The show is a melange of songs from 11 Rodgers and Hammerstein musicals, from the very well-known ('Oklahoma!,' 'The King and I' and 'Sound of Music') to the lesser known ('Flower Drum Song' and 'State Fair') to the rarely heard ('Cinderella,' 'Me and Juliet' and 'Pipe Dream'). If you are a Rodgers and Hammerstein fan, 'It's a Grand Night' is your cup of tea.

The songs are presented in random order - there must have been a scheme in the mind of Walter Bobbie, who conceived the program back in 1993, for putting songs together in a certain format. But for the audience, that reason must have escaped them in the enjoyment of the rhyme (while all the while scrambling about in your brain trying to place the current song with a certain show).

(Fans of the Citizens Who Care annual concert - this year a tribute to Peggy Lee - probably will miss Stephen Peithman's narration, which helps put songs in perspective and gives interesting background information.)

Lisa Ferris, Ryan Drummond, Melissa Wolfklain, Justin Michael Duval and Jill Van Velzer did a generally good job, with some outstanding moments, such as Wolfklain's 'I'm in Love with a Wonderful Guy,' which was adorable, and Duval's emotional 'Love Look Away.'

Some songs gave a bit of a shock to see presented in a totally different setting, such as 'Maria' from 'Sound of Music,' which we know as the song the nuns sing about a difficult postulant becoming, instead, the frustrations of a lover about his girlfriend.

Or 'Honey Bun' - originally a camp song sung by soldiers putting on a funny play for each other - turned into a sensual spoof with a girl actually playing the girl part instead of a guy in drag. The air band which accompanied it was very funny.

The three women also give a strange turn to 'Many a New Day' and 'Wash that Man Right Out of My Hair,' that we are accustomed to being bright cheery upbeat numbers, but in this production become more sensual.

The show ends with gorgeous harmonies in 'I Have Dreamed.'

I suspect this is a show that will appeal more to those of us 'of a certain age.' In fact, at the matinee performance we attended, you could count on the fingers of one hand those who did not have gray hair (or no hair). But if you enjoy Rodgers and Hammerstein's music and want to spend a pleasant couple of hours listening to it, this is a good place to do it.
Posted by Bev Sykes at 12:21 PM