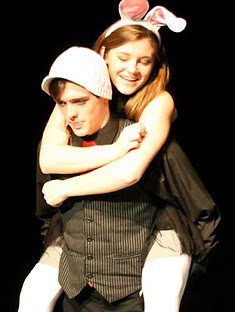 Written 26 years before, Frank Wedekind's controversial play 'Spring Awakening, a Tragedy of Childhood' closed after one night in New York in 1917...

Amid charges of obscenity and public outrage, the play was rarely seen for the better part of the 20th century - until the musical by Duncan Sheik and Steven Slater took Broadway by storm in 2007, won eight Tony awards, and gave new life to Wedekind's work.

Now the UC Davis student-run Studio 301 is bringing the original play to the Wyatt Pavilion on campus.

Studio 301 shows that its subject matter - teenage desire, suicide, abortion, incest and homosexuality - is as explosive and important today as it was a century ago.

When asked at the talk-back following opening night last week what the relevance to today's world was, director Mitchell VanLandingham listed things like Columbine, Proposition 8 and the escalation of bullying and teen suicide as examples that show, perhaps, we have not advanced as far as we think.

'Spring Awakening,' which is set in Germany in the 1890s, follows the lives of three teenagers - Melchior (Michael Lutheran), Moritz (Ryan Geraghty), and Wendla (Elizabeth Tremaine) - as they struggle with their entry into sexual awareness. In their community, sex is not spoken about between parents and children.

For example, when 14-year-old Wendla asks her mother to tell her where babies come from, the mother tells her daughter that women have children when they are married and in love. She gives no further explanation of sex and changes the subject. It is not surprising, therefore, that when she and Melchior become friends things get out of hand, setting the scene for one of the play's tragedies.

Extreme corporal punishment is the accepted method of dealing with children.

Martha (Stephanie Moore) confesses that her father beats her over trivial things, and also sexually abuses her.

Melchior seems to know more about life and sexual activity than any of his friends and his thesis explaining things for Moritz (complete with illustrations) becomes the catalyst for another tragedy.

The nine actors in this production (others are Skylar Collins, Gillian Heitman, Matt Kronzer, Ulysses Morazan and Rachel Wagner) all take multiple roles and all are very strong.

Lutheran makes an impression since he projects best and there is never a problem understanding him.

Geraghty's character is maybe the most complex and the actor handles it adroitly. Morazan may have the most memorable scene in the play.

Costume designer Esteban Gonzalez has chosen a monochromatic scheme for his costumes, with everyone in black, white or shades of gray, which neatly reflects the society in which the characters live and provides a stark contrast from the occasional red used to indicate violence or trauma.

Unlike so many works that claim to tell the truth of adolescence, 'Spring Awakening' offers no easy answers - or redemption. It is a difficult story and definitely not for younger children, but it has a great impact on its audience and leaves us with much to ponder.

All performances are at 8 p.m. with the exception of Sunday's 2 p.m. matinee.
Posted by Bev Sykes at 2:03 PM