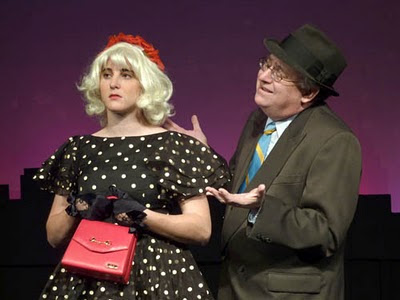 The popularity of and enduring affection for Frank Loesser’s “Guys and Dolls” is easily seen in its award history. It swept the Tonys in 1951, the year it opened on Broadway (where it ran for 1,200 performances), winning not only “Best Musical,” but also awards for Best Actor, Actress, Director and Choreographer.

It had nominations again for Best Actor (Jerry Orbach) in 1965, and was nominated in 1977 for Best Revival of a Musical.

In 1992 it again won an award for Best Revival of a Musical, as well as awards for Director, Choreographer and Actress, with four additional nominations for the revival. In 2009 it was again nominated for Best Revival.

Often called “the perfect Broadway Musical,” “Guys and Dolls” is a perennial favorite for community theater. The Davis Musical Theatre Company last presented the musical in 2004 and is now reviving it for a limited run at the Hoblit Performing Arts Center under the direction of Jan Isaacson.

The book, by Jo Swerling and Abe Burrows, is based on two short stories by Damon Runyon, “The Idyll of Miss Sarah Brown” and “Blood Pressure,” and also borrows characters from other Runyon stories.

Burrows’ book actually won the Pulitzer Prize in letters in 1951, but because of the author’s problems with the House Un-American Activities committee, the prize was never awarded and instead no prize for letters was given that year.

It is the story of good and evil clashing in the bustling streets of New York City, only the good isn’t always completely likable and the evil is often endearing.

Steve Isaacson is reprising his 2004 role as Nathan Detroit, who runs the “oldest established permanent floating crap game in New York.” Giving Isaacson the role of a wise-cracking New Yorker is like casting Stallone as a not-too-bright fighter. Isaacson fits the role perfectly and you know you’re in good hands whenever he is on stage.

At the start of the show, Detroit is looking for a place to hold his nightly game because Lt Brannigan (Mike Ball) is hot on his tail and all of his usual locations have refused to let him set up there. This game is particularly important because Harry the Horse (Giorgio Selvaggio) is in town and has brought high roller “Big Jule” (Spencer Johnson), who has lots of big bucks and is eager to earn more.

In the meantime, Detroit’s fiancée of 14 years, Miss Adelaide (Brittany Bickel), a dancer at the Hotsy Totsy Club, is getting tired of waiting for Nathan to set the date (“Adelaide’s Lament”).

Nathan learns he can use the Biltmore Garage for his game, but must pay $1,000, which he does not have. He tries to borrow the money from Skye Masterson (Travis Nagler), a gambler known to bet on anything. Nathan bets that Skye can’t convince Salvation Army missionary Sarah Brown (Laura Wardrip) to accompany him to Cuba.

While lacking the pizzazz of Isaason’s performance, Nagler looks every bit what one would expect from a New York gambler. And while Wardrip, despite being sabotaged by a terrible wig, had some vocal problems early in the show, she managed to come into her own in her duet with Adelaide (“Marry the Man Today”).

A very sweet moment was the song Sarah’s father (Dave Isaacson — no relation to Steve) sang to his daughter (“More I Cannot Wish You”).

Masterson delivers a group of sinners to the mission in an effort to help save it, as “General Cartwright” (Mary Young) feels that it has been a dismal failure and is ready to shut it down. The song “Sit Down, You’re Rocking the Boat” from that service is always the high point of the show, and Kyle Hadley as Nicely-Nicely Johnson continued the tradition and did not disappoint.

“Guys and Dolls” is a big, brassy musical that suffers a bit in this production from the muffled sound of the DMTC orchestra, but it still manages to persevere and left the audience applauding enthusiastically at the end.