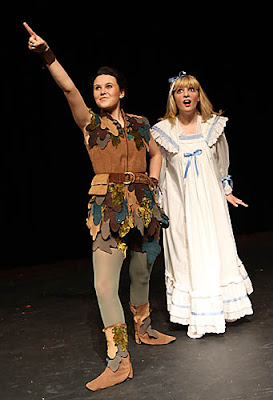 The little boy in front of me looked to be about 4 years old and he was absolutely mesmerized by the antics of the pirates on stage at the Davis Musical Theatre Company’s sparkling new production of “Peter Pan,” directed by Steve Isaacson.

There is something for all ages in this funny, colorful production, which was fortunate because DMTC had a near sell-out house for the opening. There were patrons of all ages, every one of them enjoying the show.

The role of Peter Pan, the boy who refuses to grow up, is traditionally played by a female and this was no exception. McKinley Carlisle is a high school junior but with a professional adult stage presence. She is a gymnast in school, which helped her make all of Peter’s flying sequences beautifully realistic.

She was endearing trying to attach her shadow with soap, wistful in her comments about wanting someone to read stories, and chivalrous in saving Tiger Lily and Wendy from the evil pirates.

The Darling children, while somewhat tall for the roles (especially John, Noah Papagni) were all wonderful. Wendy (Amanda Jane Melhuish) moved seamlessly into her mother role and Michael (William Chan) was just adorable, carrying his teddy bear around with him.

The Darling parents are played by Jenny Plasse and Michael Cross (who later appears as Captain Hook). Cross, in particular, was effective in his role. Plasse was very sweet.

Levi Fuentes was one of the more believable nursemaids, as Nana the dog.

There was some problem with Tinkerbell, who appears as a ball of light darting about the stage, thanks to the operation of Karay Himo, who seemed to have some problem operating the light. Rarely was Tinkerbell where a character was speaking to her.

Wendy would look in one place, but Tink was on the wall behind her. But it really didn’t matter. When Tink begins to “die,” it was very poignant and we all clapped enthusiastically to show that we did believe in fairies.

Michael Cross as Captain Hook was simply wonderful. His performance was strong and intimidating without being over the top, as he leads his bumbling band of pirates in an attempt to capture the Lost Boys in general, and Peter Pan in particlar. His sidekick Smee was appropriately deferential.

This is not a production that has been rendered politically correct by changing the portrayal of the Indians, and Emily Jo Seminoff is fun as Tiger Lily, doing several Indian dances with her cohorts — Danielle Debow, Isabel Machado, Monica Parisi, Jenny Plasse, Madelyn Robinson, Anissa Smith, Lydia Smith and Hannah Wallace.

Thomas Eredia is very funny as the crocodile who hungers for the rest of Captain Hook, having had a taste of one hand years before

Others in the cast include Monica Parisi as the maid Liza, Kimmi Kuanto as the grown-up Wendy’s daughter Jane, and a multitude of actors of all ages as Lost Boys, Pirates, Indians, Trees, Animals and Shadow Dancers.

Choreography is by Cyndi Mitterholzer and is lively and appropriate for the abilities of the dancers.

Costumes by Jean Henderson, are wonderful, as always, and in this case, very colorful as befits the cartoonesque story.

Steve Isaacson’s sets are better than many DMTC sets and deserve kudos.

This is a cast of dozens, combining adults and children, and it all comes together beautifully.

Before the show began, DMTC awarded its annual scholarship to Ashley Hickman and Rebecca Rudy, alumnae of DMTC’s youth program. This is one way DMTC gives back to the community and supports young people as they begin their college studies. The girls received engraved boxes and checks to go toward their tuition.

There is never a slow spot in this production. It is appropriate for children of all ages — by all means, do take your little ones. They, like the little boy in front of me, will be on the edge of their seats throughout the show.
Posted by Bev Sykes at 10:45 PM