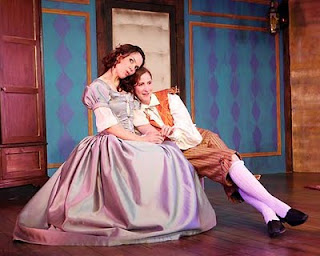 If you have been complaining lately that there is too much sex on TV and in the movies, that we have gone way too far with what is and is not acceptable when it comes to sex in our entertainment, and rolled your eyes about these kids today, then you probably have never heard of Aphra Behn.

Behn was the very first professional English female playwright, in the middle of the 17th century, the period of the Restoration. She was one of the most prolific dramatists of her time (she was also a spy for the court of Charles II).

And she was wonderfully scandalous, even by modern-day standards. She was famous not only for being a pioneer female writer in a male-dominated profession, but also for addressing issues of gender and sexuality. Her forte was comedy and she created strong, independent female characters who made their own choices.

Behn is the subject of a very funny play, “Or,” (the comma is part of the title), written by Liz Duffy Adams and directed by Peter Mohrmann, which is being presented at Capital Stage to close out the company’s life on the Delta King. (The new season will inaugurate Capital Stage’s new home in midtown Sacramento in October.)

Director Mohrmann could not have chosen a more fun way to say goodbye to the company’s riverboat home. It is a play rife with delicious wordplay, cross-dressing, amorous liaisons in many interesting combinations, and is a marvelous celebration of the birth of feminism.

There is a cast of three — Stephanie Gularte, who plays the ambitious, sensual Behn; Jonathan Rys Williams, playing the double role of Charles and Behn’s husband William; and, in her Capital Stage debut, the amazing Jessica Bates, who plays everybody else. Incredible quick costume changes take place throughout the 90 minute, one-act play.

The action begins in debtor’s prison, with Behn composing a letter to the king, who has not paid her for her services. She writes her note in rhyme:

Before she can finish her note, she is visited by a masked stranger with whom she apparently has had a previous intimate relationship. The visitor is revealed as the king, who informs her that her debts have been paid and she is free to leave. He wants her as his mistress, an idea about which she is less than enthusiastic. But she needs a place to write, so they strike a bargain, with Behn dictating the terms (which include intimacies that do not extend to the bed).

What follows takes place in a boarding house the king has found for Behn and the play becomes a regular bedroom farce, with two doors and an armoire to go in and out of as Williams and Bates change characters.

Bates first appears as the actress Nell Gwynne, England’s first leading lady of the stage. (Women had not been permitted to act before. In Shakespeare’s time, all female roles were played by men.) Gwynne is dressed as a man and is eager for a relationship with Behn, not only professionally but physically as well.

The fun is when Behn’s husband William returns, presumably from the dead, and the actors begin to switch back and forth as various characters, while Behn interacts with them, and then gets an idea and rushes to her desk to write it down.

Bates is particularly amazing as Lady Davenant, the widowed proprietor of an acting company, who rattles off a monologue that runs the better part of two solid pages of dialogue, sounding like Julia Child speaking a mile a minute. It’s a performance that stops the show with applause.

In “Or,” Liz Adams has sprinkled the grave of Aphra Behn liberally with flowers and given us a wonderful, if not quite historically accurate, picture of a remarkable woman.