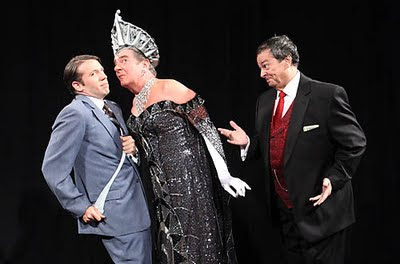 “The Producers,” directed by Glenn Casale, kicks off Music Circus’s 61st season and is a great way to start a season that will include “Oliver!” “Anything Goes,” “Camelot,” “I Do! I Do!,” “Annie Get Your Gun” and “Miss Saigon.”

Whatever your ethnicity, nationality, religion, sexual orientation or political affiliation, there will be something in Mel Brooks’ “The Producers,” to offend everyone, yet it’s all done with such a sense of fun that you’re amazed at the things that make you laugh. You’ll find yourself laughing at things you never ever thought you would find funny.

It’s Catskills in-your-face humor in a tuxedo, burlesque all grown up.

When it opened on Broadway, the show won an unprecedented 12 Tony awards, breaking the record previously held by “Hello Dolly” for 37 years.

“The Producers” is the show that Mel Brooks wanted to write all of his life, the musical that we saw glimmers of in several of his movies, especially, of course, the 1968 movie from which the plot of this show was taken.

It’s the story of Max Bialystock, the worst producer on Broadway, played energetically by Bob Amaral, who played the role a couple of years ago as part of the touring company that played Sacramento. Amaral is a force of nature and holds nothing back.

Every bit his equal is Matt Loehr, as Leo Bloom, the mild mannered bookkeeper who figures out that a producer can make millions of dollars by over-selling stock in the show and then producing a flop that will close immediately. Loehr’s performance is amazing and, like Amaral, he holds nothing back. The two men decide “We can do it” and set about finding the worst play ever written.

That would be “Springtime for Hitler,” a paean to the Fuhrer by an old pigeon-raising Nazi, Franz Liebkind (Bill Nolte, who also was seen as Liebkind in the touring Broadway Series production) who wants the world to know that Adolph really wasn’t such a bad guy and feels that showing him frolicking about the countryside with Eva Braun is just the way to change history’s negative opinion of his idol.

Once the world’s worst play is chosen, the next step is to find the worst director and in that we have the best actor, Gary Beach, who originated the role of Roger DeBris on Broadway. The flamboyant DeBris makes his entrance in a stunning silver and black gown, which he says makes him look like the Chrysler building.

DeBris has to be convinced to take on the directing job, but once allowed to make the whole Hitler story less depressing by adding cute song and dance numbers, and maybe letting Germany win for a change, because it’s less of a downer, he’s all for it. When you see him goose step into “Springtime for Hitler” after Liebkind suffers an injury on opening night, well there just was never such a cute Hitler before.

DeBris’ “common law assistant” is Carmen Ghia (Michael Paternostro) who is about the gayest thing you’ve ever seen and who got the first standing ovation of the evening.

The Swedish bombshell who wants to audition for the show, and who ends up working in the office for Max and Leo is Ulla (Sarah Cornell), the tallest, blondest, sex-goddess you’re ever likely to meet. She can run an office, paint a room during intermission, and star in a musical all without mussing a blonde curl. The height difference between her and both Max and Leo gets played for every laugh it can possibly be played.

Choreography is by Dan Mojica and the dancers of Little Old Lady Land (including such hormone-crazed silver haired women as “Hold-me-Touch-Me” (Diane Vincent), “Lick-Me-Bite-Me” (Merrill West) and “Kiss-Me-Feel-Me” (Kim Arnett) is one of the funniest of the evening.

If you want a good laugh, “The Producers” is just the solution. Music Circus Executive Producer Richard Lewis says there are still a few tickets left, so hurry and get your tickets before they are sold out.