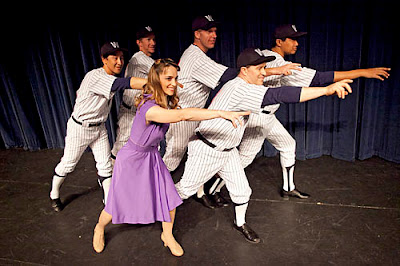 At the start of the second act of the Davis Musical Theatre Company’s production of “Damn Yankees” — directed and choreographed by Rand Martin — the coach of the Washington Senators (Scott Minor) gives his team a big pep talk. After the pep talk, the team does a rousing rendition of “The Game.”

It made me wish that Minor had given the pep talk to the entire cast before the show started. The show is OK, and I suspect DMTC devotees will enjoy it, but it desperately needs some energy.

“Damn Yankees,” by Richard Adler and Jerry Ross, is a modern version of the Mephistopheles story, the story of a man who so desperately wants his beloved baseball team to win the World Series that he’s willing to sell his soul to the devil to make it happen.

Joe Boyd (Mike Ball) has been an avid Senators fan all his life, a fact that has bothered his wife Meg (Chris Cay Stewart) throughout their marriage, but she has learned to live with it (“Six Months Out of Every Year”). Once again, the team is facing another losing season.

When Joe cries that he’d be willing to sell his soul for a penant win, “Mr. Applegate” appears (Tim Gaffaney) and promises Joe that not only can he ensure a win for the Senators, but Joe himself can fulfill his lifelong dream and be the player who saves the day. All he needs to do is sign a contract, pack up his cleats and his bat, and leave a note for Meg.

No fool, Joe, he insists on an escape clause, to which Applegate reluctantly agrees (certain he can find a way to work around it). The play, and the game, is on.

“Damn Yankees” relies heavily on a strong, vital Applegate. While Gaffaney is a good actor, sings well and dances well, he lacks that pizzazz that make the performance rise to the level of great. Applegate’s signature number, “Those Were the Good Old Days,” is such an audience pleaser that an encore was written into the script, despite the fact that applause had died off before Gaffaney returned to sing it.

Ball gives a competent performance as Joe Boyd and the difference between the middle-aged Boyd and the young, vibrant Joe Hardy who appears when the contract is signed is like night and day. Kevin Foster’s first notes establish him as a very good singer and he is outstanding in each of his scenes.

Jenny Plasse plays Gloria, a reporter who follows the Senators around and who is the only one who picks up that there is something odd about the team’s new superstar. Plasse is fun to watch, especially when she is being tossed about by the team during “Shoeless Joe from Hannibal Moe.”

The choreography throughout was clever and would have been much better if the ensemble had maybe a few more rehearsals. The team dance numbers are striking when all the men are in precision, but when one or two are on the wrong foot or can’t get back in sync with the others, it just looks sloppy.

I am assuming that with additional performances under their uniforms, the precision will improve, and will then truly be a wonderful thing to watch.

Likewise, the chorus doesn’t always start on the right key for their songs, but eventually they find their way back, with the help of DMTC’s 20-piece under-stage orchestra.

Danielle DeBow is Lola, called from the netherworld by Mr. Applegate to seduce Joe. She undulates nicely through her signature song, “Whatever Lola Wants, Lola Gets,” though since Joe’s love for his wife is so strong, in this case Lola doesn’t get what she wants.

But she becomes a sympathetic character when she and Joe both commiserate about their respective dues owed to Applegate. Their duet, “Two Lost Souls,” was one of my favorite numbers.

I think fans of DMTC will enjoy this show. It can only get better as the performers settle into their roles. There’s a lot of fun stuff going on on stage and if they get Coach Van Buren to give everyone a pep talk before the curtain opens, DMTC could hit this one out of the ball park.
Posted by Bev Sykes at 9:43 PM