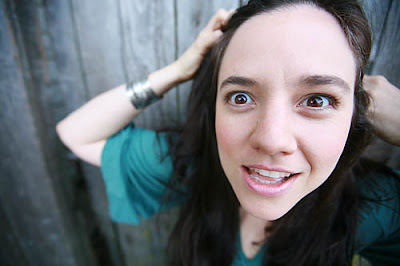 Katie Rubin may just be one of the busiest performers you’re likely to meet.

Rubin had been writing jokes for a long time.

“I had this idea to do a small hour of stand-up material on spirituality and recovery for five years or so,” she explains. “One day I was sick of having these jokes and not doing anything with them, so I contacted my friend Georgia at the Center for Spiritual Awareness and said ‘Let’s do a show in three months.’ In that three-month period of time I turned all of my jokes into a show.”

Unlike her previous shows, “Amazing and Sage” and “Insides Out,” this show is less personal.

“It has two characters who create a kind of narrative structure and the jokes happen at the end,” Rubin says.

“This was easier to do than the first two shows,” she adds. “In part, because I already had all the material, but also because it was not so personal to me, it wasn’t so gut-wrenching and painful and connected to my own inner journey, it was more about people I had observed outside of myself.

“It’s easier to create a character when it’s not your own story. The character who narrates the show is an amalgam of many people I met in 12-step rooms, but the narrator of the show is not me.”

Anyone who has watched the actress in any of her one-woman shows knows how frenetic she works, creating various characters and displaying conflicting emotions rapidly and seamlessly as she bounces about the stage.

“My Spiritual Death” runs “a nice tight hour,” she explains, adding that the show doesn’t have a formal director.

“It’s not a show that requires much direction,” Rubin says. “I have a couple of friends I trust in L.A. who are giving me feedback when I have performed it in L.A. a few times. They have given really useful feedback that has functioned as a directorial eye.”

Rubin is expanding her performing opportunities. She divides her time between Sacramento and Los Angeles, where she is involved with Rogue Machine Theater, which she describes as “The Capital Stage of Los Angeles — a really edgy, interesting, high-energy, smart company.”

She also has begun auditioning at large equity houses in Los Angeles and all of the equity principal auditions for Broadway touring shows and larger houses.

“I feel like I’m on a good track,” Rubin says. “People say good things, and often have me sing a second song, which means they are interested in you.”

I asked the actress how she deals with the inevitable rejection that comes with life in the theater, and she thanks her 12-step work for that.

“I have a very specific emotional and spiritual process that I use that helps me deal with the heartaches that come with all the rejection,” she explains. “When I was in New York, I met an actress who was working successfully on Broadway. She said to me, ‘the best advice I can give you is find a way to grieve all of your losses because you will get rejected more than you will get accepted so you have to accept it or you’re going to be bitter or go crazy or quit.’

“That has stayed with me. I knew that she was right. I was never very good at doing that until the last few years until I went to my healing school. where I learned how to meet the needs of my own heart and tend to myself.

“When I’m rejected. there is a way that it needs to be addressed so I don’t just suck it in and pull up my bootstraps. I don’t believe in that any more. I don’t agree with ‘tough it up’ mentality.

“Now I believe it is about softening and deepening and coming into contact with the part of ourselves that feels so hurt and sad and unloved and nurturing those parts of ourselves.”

Katie Rubin isn’t feeling hurt and sad and unloved these days, however. She is on fire and good things are happening for her.

“My Spiritual Death, a Comedy Show” is one of those good things, and should be a good thing for those in the audience fortunate enough to see it.
Posted by Bev Sykes at 4:40 PM