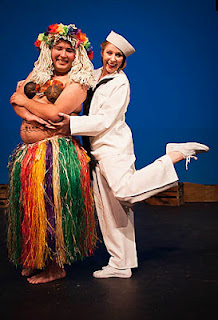 Some enchanted evening, you may find yourself at the Woodland Opera House watching a wonderful production of Rodgers and Hammerstein’s “South Pacific,” directed by Angela Baltezore, with musical direction by Dan Pool. But be quick, it closes April 1.

“South Pacific” is one of those marvelous, comfortable old chestnuts where you can probably hum along with every song (but please don’t!) and yet it’s best not to examine the plot too carefully, because it’s filled with a lot of not-very-nice stuff (like racism and child prostitution) all surrounded by beautiful and engaging music.

Baltezore’s production is a real gem, with strong characters, wonderful choreography and an orchestra that, after a sometimes wobbily overture, settled in to provide a lush background for the likes of “Younger than Springtime,” “Some Enchanted Evening,” “Bali Ha’i” and a dozen or so other numbers.

The show centers around the expatriate French planter and widower Emile de Becque (Michael Maples) and his love for Ensign Nellie Forbush (Catherine Nickerson). DeBecque is looking for another wife to be not only his soulmate, but the mother to his two children Ngana (Jordan Hayakawa) and Jerome (James Hayakawa) by his Polynesian wife.

Nellie is an unsophisticated girl from Arkansas who has a “gee-whiz, gorsh” Southern hick simplicity about her and who doesn’t know if she can fit into Emile’s world. She is also unaware that he has been married before, or that he has children.

The role of Emile de Becque was played on Broadway initially by the Italian baritone Ezio Pinza and in the movie by the Italian actor Rossano Brazzi, so those familiar with the show are accustomed to hearing an Italian portraying a Frenchman (an accent is an accent is an accent). It is difficult to pinpoint Maples’ accent (Esperanto, perhaps?), but whatever it was, he was consistent throughout. And when you have a suave, debonnaire figure to swoon over, who cares about accent authenticity?

On the other hand, it would be difficult to believe that Nickerson were not a native Southerner, judging by her own accent. She sparkles in this role and is particularly winsome in “Gonna Wash that Man Right Outta My Hair.”

Deborah Hammond steals the show as Bloody Mary, the mysterious Polynesian woman who sells trinkets to the military and who isn’t above selling the body of her young daughter Liat to a handsome young U.S. Navy lieutenant, just arrived at the base, in the hope that he will marry her and take her to America.
(Liat was played the night I saw the show by Briahna Yee, but she alternates in the role with Allison Ruanto.)

Spenser Micetich is that young lieutenant (Joseph Cable). Micetich is a marvel. This young actor is only a senior in high school, yet he has a maturity far beyond his years and has already won an Elly for his portrayal of Jean Valjean in the Young People’s production of “Les Miserables.” But here he is playing against an adult cast, and he holds his own beautifully.

Cable is taken to Bali Ha’i by Bloody Mary and begins an affair with young Liat, yet when Mary assumes the two will marry, he realizes that the prejudices against a mixed marriage are too great and he leaves the young girl.

At the same time, Nellie has encountered de Becque’s children and while she can forgive his confession that he killed a man in France, the idea of his having been married to a Polynesian woman is just too much for her Southern upbringing to handle.

Cable sings the song “You’ve Got to be Carefully Taught,” which is as timely today as it was when the musical premiered in 1949: “You have to be taught, before it’s too late / before you are six, or seven, or eight / to hate all the people your relatives hate / you have to be carefully taught.”

Outstanding is the performance of Alex Cesena as the scheming entrepreneurial Seabee Luther Billis, always looking to make a deal, desperate to find a woman. A highlight was his performance of “Honey Bun,” which he performs with Nellie at the camp’s Thanksgiving talent show.

The ensemble is excellent, particularly the Seabees, a group of men who each have small solos to sing and who each seem to have principal-quality voices. Worthy of special note are Eric Catalan as “Professor” and Jason Hammond as “Stewpot.”

Kudos to set designer John Bowles for his simple design, which worked beautifully for each scene. The projection of Bali Ha’i was a particularly lovely bit.

This is a thoroughly enjoyable production. Don’t miss it!
Posted by Bev Sykes at 11:27 PM

Agreed... For anyone on the fence about going: This is an excellent production!! I went opening night and, as seems to be the case with Woodland Opera House, it did not seem like an opening night at all-- the whole thing was very well polished, seemed to go off without a hitch, was quick-paced, energetic and so enjoyable! The entire cast is great. This show has a very strong ensemble full of veteran performers who make the show run like clockwork. Deborah Hammond is appropriately entertaining & believable as Bloody Mary, Michael Maples was believable as the Frenchman, Emile DeBecque, Spenser M. (Joseph Cable) has a gorgeous voice (and he's only in high school!) and was convincingly ill (as Cable) in the latter half. Alex Cesena was a great comic relief as Billis, balancing out the show's more dramatic side. I was especially impressed with Catherine Nickerson's performance. As Nellie Forbush, she is Reba McEntire incarnate-- particularly in her appearance. This role is especially impressive in contrast with her prior role in "White Christmas" at the Opera House-- such different roles, and she nailed each... that chameleon-like quality of an actress to become such different characters is reminiscent of the greats (think Meryl Streep)...amazing! Beautiful voice with great technique. She moves seamlessly from the comedic to the dramatic-- she's uninhibited in Nellie's giggly optimism, but also does the character great justice by honestly conveying her struggle with her own prejudices. Well done, cast & crew!!

I'm glad you mentioned Reba McEntire. I thought of her throughout!