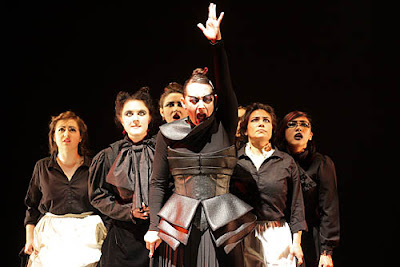 Federico García Lorca, called by some “the most important Spanish poet and dramatist of the 20th century” died in 1936 (murdered by fascists during the Spanish Civil War), so he was unaware of the current war on women’s health being waged by some in governments across this country.

Yet his “The House of Bernarda Alba,” based on a new translation by Chay Yew and directed by UC Davis Granada Artist-in-Residence Juliette Carrillo, feels as fresh and modern as if it had been written this year (especially the hurling of the epithet “slut” several times).

The play was the last of a trilogy expressing what Lorca felt was “the tragic life of Spanish women” in their male-dominated society. It also is a play about expressing the costs of repressing the freedom of others.
The play opens on a stark stage (designed by Rose-Anne Raphael), a raised platform on which the principal characters stand, facing front when they are part of a scene, standing at the back edge, with their backs to the audience when they are not part of a scene.

On either side of the platform is a row of four chairs facing the platform, on which sit the chorus who drink from wine bottles, play African drums, clap rhythmically and occasionally sing.

(Composer Dan Wilson has created the background music and sound and says he “pulled out all the stops.”)

As the action begins, the housekeeper, La Poncia (Maria Candelaria), is speaking with the maid, Blanca (Hannah Victory), about the funeral of the second husband of matriarch Bernarda Alba (Susan-Jane Harrison).

The relationship between Poncia and Bernarda is reminiscent of “Upstairs Downstairs,” or “Downton Abbey,” where the servants have been ministering to the masters for so long that the class distinction disappears when they are in private. Candelaria’s Poncia is as much in charge of this house as is her mistress and she brings some much-needed humor to the proceedings.

Harrison gives a riveting performance as the matriarch, who has very strict (and old-fashioned) ideas about the role of women.

Aided by the angular costume of Maggie Chan, and the severe hair style, with just a hint of red picked up by the lights as she moves, she is a force to be reckoned with. Her mere appearance on stage, commanding the undivided attention not only of her daughters and house staff, but of the audience as well, is enough to make one feel just a little uneasy.

Out of respect for their deceased father, Bernarda has decreed an eight-year period of mourning for her five daughters (ages 20-39), during which “not a breath of air will get in this house from the street.”
The eldest daughter Angustias (Anna Kritikos) is engaged to be married to the area’s most eligible bachelor, Pepe el Romano (whom we never see), but he is attracted to the youngest daughter Adela (Malia Abayon), who defies her mother by wearing red instead of black and carrying on a clandestine affair with Pepe.

The story deals with the sexual and personal repression of the women, most of whom seem to be harboring a secret love for Pepe. There are many references to the temperature, with fans and cold drinks used as symbols of the heat, which is more than just the temperature, but also the rising sexual tensions among the young women.

Magdalena (Wendy Wyatt-Mair), devastated by her father’s death, tends to sleep a lot, while Amelia (Jaki Joanino) is the family gossip.

Martirio (Marit Wilkerson) is the trouble maker, who reports Adela’s affair and leads to the play’s shocking conclusion.

The drama of the play is heightened significantly by lighting designer Kourtney Lampedecchio, who creates stunning silhouettes and whose final special effect will have audience members gasping.
This classic story is dark and full of poetic language and symbolism, but it holds up surprisingly well after more than 70 years. The audience will find “The House of Bernarda Alba” a memorable evening of intense drama.
Posted by Bev Sykes at 2:17 PM