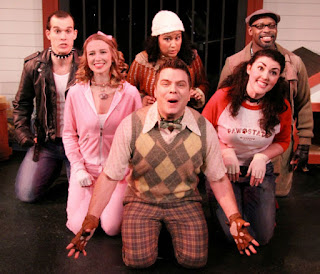 “Bark, The Musical,” directed by Michael Laun with choreography by Jacob Montoya, is now entertaining audiences on Sacramento Theater Company’s Pollack Stage. A portion of the proceeds will go STC’s partner for this production, the Sacramento SPCA. Adoptable dogs will be on display at some productions, and a poster of dogs up for adoption adorn the lobby.

This show is somewhat of a phenomenon. After making its debut in Los Angeles in 2004, it received rave reviews, ran for two years, and became the third longest running show in Los Angeles history. It ran seven months in Chicago and has played in little theaters all across the country, as well has having had a Portuguese translation for showing in Brazil.

This isn’t exactly the dog-lovers’ answer to “Cats.” The scale is much smaller, and the dog-specific parts of the costumes (by McKayla Butym) are limited to collars, leashes and pads for hands, but it is as earnest as a puppy begging you to love it.

This a show built by committee. The book is by Mark Winkler and Gavin Geoffrey Dillard, music by David Troy Francis, lyrics by Dillard, Winkler and Robert Schrock, with additional lyrics by Jonathan Heath and Danny Lukic.

There are 23 songs that give us a glimpse at life from a dog’s perspective. Titles such as “Whizzin’ on Stuff,” “Fooood!” “Howling Just to Scare Away the Blues,” and “Dirty, Filthy Old Flea Bag” let the audience know immediately what to expect, though it is less clear with songs like “Mighty Mutt from Mars” or “Senorita la Pepita.”

Dog lovers will recognize each of the characters by their breed. King, the Labrador Retriever (Armond Edward Dorsey), is missing his master, who has grown up and gone away to school. He awaits the day when they will be together again. His interpretation of “Dog’s Best Friend” and the later “Grassy Field” are both very emotional, while his story of being neutered was very funny.

Jessica Goldman is listed as Boo, the Cocker Spaniel, but was unable to perform on opening night, so her role was played by Meghan Greene, from STC’s Young Professional’s Conservatory. Greene is a sweet and cuddly cocker spaniel, though her voice did not have the power of her co-stars. She did, however, give a touching rendition of “Pound Song,” telling the story of losing her pups when they were rounded up by the dog catcher.

Golde, the Bull Dog was played by Miranda D. Lawson. Golde is the comedian of the group, always with a cynical, sardonic aside. Her depiction of a dog wearing a neck cone is hilarious.

Tyler Wipfli is Chanel, the French Poodle. Owned by a gay couple and dressed in pink and feathers, Chanel’s favorite time of the week is when she and one of her owners listen to opera together. Her song “Il Cane Dell’Opera” was one of the highlights of the show, and displays her musical training (she is a Music Theater major, studying voice at Oklahoma City University).

Sean Patrick Nill plays Sam, the Pit Butt Mutt. He and King vie for yard superiority. His “M-U-T-T Rap” is another highlight, which lists just about every breed in the book, comparing them to plain vanilla mutts.

Rocks, the Jack Russell pup is played by a “please love me!” Scottie Woodard, so eager to please and a continually wagging tail. Rocks presents the only real “story” of the evening, trying to learn how to bark, and getting lessons from the older dogs.

The dogs remind us that their needs are simple — a handful of kibble, fresh water, a loving hand to pet them, and a place to call home. “Bark” is a reminder to go home and give our pets a scratch behind the ears and a tummy rub and let them know how glad we are that they are in our lives.

And if you have no dog in your life currently, the SPCA will be happy to help you find your own forever friend at one of the performances.
Posted by Bev Sykes at 10:09 AM