The Undoing of Prudencia Hart 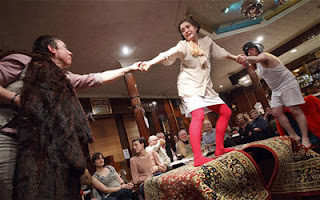 Can an evening possibly go wrong when it starts out with Celtic music played on the uilleann pipe — the smaller cousin to the bagpipe? I think not.

“The Undoing of Prudencia Hart” is a gift to the audience by the National Theater of Scotland, now playing at Mondavi’s Vanderhoef Theater through Sunday. It was a big hit at the Edinburgh Fringe Festival, so you knew right off that it was not going to be your run of the mill play.

For starters, the audience members were taken in, about 10 at a time, to give guides inside an opportunity to explain how the evening would go.

The theater seats were gone, in their place, tables and chairs had been set up to simulate a Scottish pub. A bar was placed along one wall, where free “wee drams” of Scotch whiskey were being served. (Another free “wee dram” would be offered at intermission, along with finger sandwiches passed around by the ushers.)

Our guide explained that it was open seating and that it wasn’t important to sit near the stage, since the actors would be using the entire room as the play progressed.

The actors (Annie Grace, Melody Grove, Alasdair Macrae, Paul McCole and David McKay) passed among the tables, explaining that we were supposed to tear the paper napkins given to us into small bits to be used as snow later in the show.

As the action began, there were two problems with the show. The lack of microphones made much of the dialog (which, when we could understand it, was very clever verse) difficult to hear, made more difficult by the heavy Scottish accents. But understanding every word was not necessary to the enjoyment of the evening.

The story of the writing of the script for this show is almost as entertaining as the show itself. It came out of an experience by writer David Grieg, director Wils Wilson and composer Alasdair Macrae, when they visited a pub while researching the Border Ballads for the show. It was the coldest winter in Scotland in many years and they were so comfortable in the pub that nobody wanted the evening to end, so they locked the pub doors and sat around all evening telling story after story. Out of one of those stories (said to be 110 percent true) came the story of Prudencia Hart.

Prudencia (Grove) is an academic, an expert on ballads, literature and “the topography of hell.” She is en route to a conference in the border town of Kelso, driving through a snowstorm to get to a professional meeting. The entire cast gathers around Pru to form a car, with flashlights for headlights and, most clever, the use of a violin bow as a windshield wiper, while tossing bits of napkin bits for the snow.

After much verbal sparring between Pru and her fellow academics, she is trapped in a pub with her nemesis Collin Syme (Clark), where the whiskey flows and inhibitions dissolve as the lights go out, leaving the pub in complete darkness, a problem very cleverly solved by the cast.

Ultimately Pru tears herself away and goes out into the night in search of a B&B and finds herself, instead, in hell.

After the intermission, Act 2 seems like a different play, much more sedate, much easier to follow, and initially lacking the free-wheeling antics of Act 1. Hell, Pru discovers is far more entertaining than she ever imagined — at least for the first few millennia.

Ultimately, however, the lure of “every book that was ever written and even those that have not been written yet” loses its appeal and she finds herself popping up to watch the grass grow in the cracks of the Costco parking lot instead. She decides she wants to return to her non-dead life. She attempts to trick Satan (McKay) into rhyming with her (using the language of love and humanity) to get him to take pity on her and allow her to return to her old life. McKay’s response to his inability to stop rhyming is very funny.

There is a bit of the Orpheus mythology about Pru’s attempts to escape, and the attacks on her would-be rescuer, Collin, are hilarious.

The fun of this show is not necessarily in the plot, but in the ensemble, the music, the hijinks. It is a unique piece of theater, and easy to see why this was a sell-out at the fringe festival and has been a sell-out wherever it plays.
Posted by Bev Sykes at 9:02 AM