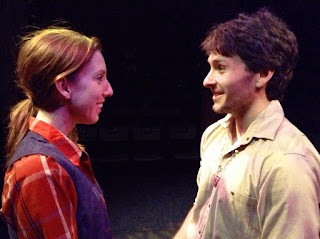 Shakespeare’s “As You Like It,” now presented by the Davis Shakespeare Ensemble at the charming UC Davis Arboretum Gazebo on Garrod Drive, is a strange play. Many times you want to hit the rewind button to try to figure out why things are happening, but you never do.

For example, why is Rosalind (Hayley Palmer) suddenly expelled from the palace of Duke Frederick (John Haine)? For that matter, why does Frederick suddenly decide to abdicate and return the throne to Duke Senior, his older brother? (Must be some powerful unseen holy man who convinces him to give it all up.)

However, unanswered questions aside, this is another enjoyable production by the Davis Shakespeare Ensemble, which always seems to prove that you can put on first-rate productions on a shoestring budget. This, the company’s fourth annual summer production, takes inspiration from Appalachian culture and music, with a band (Gia Battista, Richard Chowenhill, Adam Smith and Tony Dumas, who also jump into bit parts in the play) sounding for all the world like tracks off of “O Brother, Where Art Thou?”

(Those who would like to understand the lyrics would do well to check out the DSE’s YouTube site, because they are tuneful, but all but unintelligible in the Gazebo.)

Performances range from very good to outstanding. Casey Worthington cuts a dashing figure as Orlando, youngest son of the deceased Sir Roland de Bois, especially in his many classic poses designed to represent wrestling competitions in which he is competing. There is just something about this actor that strikes you as he walks on stage. He has an assurance and self-confidence that is compelling.

Orlando’s older brother Oliver is the menacing Jason Oler, whom I last saw as the playful Puck in Sacramento Theatre Company’s “Midsummer Night’s Dream.” Whether playful or menacing, Oler always delivers, and does so in this production, as he plots the murder of his brother in a wrestling match.

New to DSE, Palmer tackles the meaty role of Rosalind, daughter of Duke Senior, living in the palace of Duke Frederick until her unexplained exile. She handles the role beautifully, flitting back and forth between the female Rosalind and the male persona Ganymede, which she adopts as she travels through the Forest of Arden.

Melanie Marshall, also last seen in “Midsummer Night’s Dream,” is outstanding as Rosalind’s cousin Celia, who ultimately finds herself in love with a reformed Oliver.

Playing both Duke Frederick and Duke Senior, Haine cuts a dashing, princely figure, though he had difficulty projecting enough to make himself consistently heard in the small Gazebo.

Sarah Cohen has made Shakespeare comic figures her forte and she does not disappoint as Touchstone in this production. She is always a commanding figure and is sure to draw the most humor from her roles.

Davis native son Matthew Edwards returns from a lengthy professional career to make his DSE debut as Jacques, Orlando’s older and Oliver’s younger brother in this production. If the program did not already identify him as the only member of Actors Equity in the cast, it would be impossible not to suspect. He is a figure that you cannot ignore and his performance is impeccable, though rather than overshadowing his fellow actors, he blends in beautifully.

In the role of Phoebe, Samia La Virgne makes an impression and is very funny in the love Gordian knot that develops among all the characters.

In his notes to a 2005 production of this play by Acme Theatre Company, director David Burmester wrote that “‘As You Like It’ is a play about love: physical and intellectual love, sentimental and cynical love, love at first sight, love between friends, love between relatives, imagined love, and deep, lasting love. It is the roles we are often forced to play, either by circumstance or by societal pressure.”

The Davis Shakespeare Ensemble, frolicking in often convoluted love relationships in the Arboretum, play those roles very well.
Posted by Bev Sykes at 10:43 AM