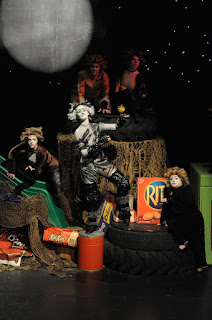 There is a band of feral cats hanging around the Jean Henderson Performing Arts Center these days, but nobody at the Davis Musical Theater Company seems to mind because when they crawl, leap, and dance out onto the stage, the audience loves them.

With this production of Andrew Lloyd Webber’s “Cats,” DMTC proves that not only can it act and sing, but by golly, those guys can dance!  While DMTC displayed great dancing by some members in its Elly award winning “Chicago,” in this production, directed by Steve Isaacson and choreograhed by Pamela Lourentzos, a cast of 25 dances.  And does it beautifully, starting with the jaw-dropping “Jellicle Songs for Jellicle Cats” and continuing throughout the show.

"Cats" was inspired by T.S. Eliot's 1939 collection of children's poems entitled "Old Possum's Book of Practical Cats."  The songs are used primarily as a vehicle for introducing new cats and new musical numbers.  Those looking for an actual “plot” will be confused.  If there is any plot at all, it is the very slight mystery surrounding which cat Old Deuteronomy (Nathan Lacy), the leader of the cats, will choose to go to the “Heaviside Layer” to be reborn.

While the decision is being made, some 22 songs about cats will be sung, The music is engaging, and the cats are delightful.

Essential to the success of “Cats” are the costumes and makeup, transforming actors into cats.  Jean Henderson stresses that especially for this show she is the costume coordinator, not the costume designer, and thanks El Dorado Musical Theater and River City Theater Companies for loan of costumes.  Costume painting was done by Jennifer Nachmanoff with wigs by Amanda Walker and assistant Christina Gross.  Erika Wilson and her son did make-up workshops.

When it comes together the look is beautiful, with the exception of Old Deuteronomy, whose old cat costume made him look more like a Biblical prophet than a cat (but he’s supposed to, says Director Isaacson, pointing out his name.)

When he sheds his long old cat fur and becomes Gus, the theater cat, reminiscing about his years in the theater he displays a strong, booming voice and a poise that befits that of a beloved theater mascot.  (“His grandest creation as he loves to tell / Was Firefrorefiddle, the Fiend of the Fell” has been an earworm in my head for days now!)

Andrea Eve Thorpe was an outstanding Grizzabella, the motheaten former glamour cat, who hopes to be chosen to go to the "Heaviside Layer.”  Her "Memory," the big hit from this show, was hauntingly beautiful.

Gabe Avila as Skimbleshanks, the cat on the railway train, gave a crisp performance that was a delight.

In all, the cats were so realistic I felt I had to come home and apologize to my dogs for fraternizing with the opposite species.

“Cats” may not be everybody’s saucer of milk.  Those who prefer a plot show may not enjoy it, but the musical numbers are so delightful, it’s difficult to imagine anybody not liking this production.  I found Act 2 more enjoyable than Act 1, as it gives up all pretense of any plot whatsoever and just presents several stand-alone numbers, each introducing a different cat.

Also kudos to the DMTC orchestra, which may have been the best I’ve heard–all instruments were heard and it was well balanced.