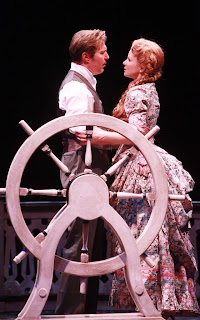 When Jerome Kern and Oscar Hammerstein II’s “Show Boat” first opened in 1927, it was like nothing anyone had ever seen before. Based on the book by Edna Ferber, it was no light and frothy musical, but more of a musical melodrama, as it dealt with serious problems, more in the manner of an opera.

The story focuses on race relations, miscegenation, alcoholism, failed marriages, compulsive gambling and single motherhood. It also has the necessary beautiful love story and a happy ending, with the comic characters of Captain Andy and his wife Parthy, who run the show boat, the Cotton Blossom.

“Show Boat” has become a beloved musical theater classic and is now being given a loving re-creation by Sacramento’s Music Circus, under the direction of Glenn Casale. This is a production which, unlike the 1951 movie, follows the Ferber book rather faithfully.

Opening in the late 1880s, the story centers around the Cotton Blossom, captained by Cap’n Andy Hawks (George Lee Andrews). Andrews (who owns the Guinness world record for most performances in a single show on Broadway, after appearing in “Phantom of the Opera” for nearly 25 years!) is a perfect Cap’n Andy. Though under the dominance of his shrill-voiced wife Parthy (Audry Neenan), Andy shows his independence now and then, especially when it concerns his daughter, Magnolia (Jennifer Hope Wills).

Neenan is a real harridan of a Parthy and, honestly, nothing much likeable about her. It would have been nice to see her softer side a little more than just in singing a lullaby to baby Kim.

Wills is a beautiful Magnolia, with a lovely voice. She begins as a young, innocent girl and ends as a mature woman who has weathered all the bad things that life has thrown at her and come out a winner. Wills’ transformation from innocent to girl in love to successful matron is impressive.

Ron Bohmer is Gaylord Ravenal, the riverboat gambler who wins the heart of the young Magnolia Hawks and probably most of the females in the audience. He looks every bit the part of the suave roué who sweet-talks Magnolia. Though their instant love seems a bit unbelievable, their chemistry throughout the play works well for them both. It doesn’t hurt that his powerful baritone blends beautifully with Wills’ beautiful soprano in popular numbers such as “Only Make Believe” and “You Are Love.”

If there is a show-stopper, however, it is Phillip Boykin as the stevedore Joe, whose “Old Man River” brought out every nuance in that well-known song and gave it even deeper meaning. He also hit all the low notes clearly, which is a special treat.

The character of Julie Laverne, the light-skinned black woman, passing for white, and the most popular attraction on the Cotton Blossom, is always a character I would like to see more of, but Nikki Crawford made the most of her two powerful numbers, “Can’t Help Lovin’ that Man of Mine” and “Bill.”

As her husband, Steve, Gordon Goodman is wonderfully noble as he cuts Julie’s hand and sucks a bit of her blood to prevent there from being a charge against them for a mixed-race marriage (since one drop of Negro blood means that you are considered a Negro) as they are ejected from the Cotton Blossom.

Jennifer Cody and Jamie Torcellini are wonderful as Ellie and Frank, the comedic duo. People may not recognize Torcellini, since he was covered in costume as the Cowardly Lion in “The Wizard of Oz” earlier this season. Cody is cute as a button, trying desperately to become an actress, but forever stuck in comic roles because she’s so good at it.

Sharon Wilkins is Queenie, the “mammy” character in the original, who finds her own dignity in this production with numbers like “Mis’ry’s Comin’ Aroun’.”

Eleven-year-old Noa Solorio, a student at Pioneer Elementary School and a veteran of Davis Musical Theatre Company productions, appears as young Kim, Magnolia’s daughter. She’s very cute, though her role is brief.
Dan Mojica is the choreographer for this show and has created some lively, bright numbers, though perhaps the most outstanding was a dance scene that takes the audience through some 30 years of history via dance and costume changes. Costume designer Leon Wiebers must have been in his element!

“Show Boat” is a delightful production without a weak spot in the nearly three hours (including intermission). Act 1, which runs about an hour and a half, was so engaging that my 93-year-old mother was surprised that it was so “short”!
Posted by Bev Sykes at 11:51 AM