The Elegant Entrance of Chad Deity 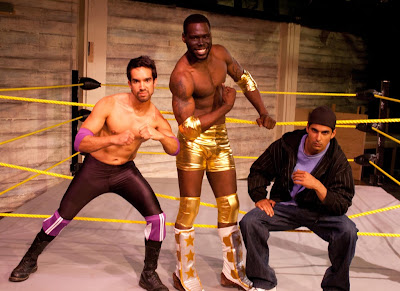 “Both theater and wrestling employ lights, sound, costumes, props, choreography or blocking,” writes Janey Pintar in the program for the “The Elaborate Entrance of Chad Deity,” now running at Capital Stage in Sacramento.  “Much like blocking on stage, wrestling moves compose the choreography–necessitating teamwork and trust...If an actor flubs a line...if a wrestler botches up a move, either or both could be seriously injured.”

The truth of this statement came in the note inserted in the program announcing the substitution of James Long for actor Rob August, injured during a preview performance and, though recovering, unable to return to the play.  Long has both acting and wrestling experience and had just finished run in a production of “Chad Deity” in Washington, D.C.

It doesn’t take long into the play before the audience understands the danger and the risk for the actors, and the very real link between professional wrestling and theatrical performances.

“The Elaborate Entrance of Chad Deity,” a 2010 Pulitzer Prize finalist, is a satire about professional wrestling, written by Kristoffer Diaz and directed by Jonathan Williams.  It is a show the likes of which you may not have seen before.  None in our group knew what to expect and we were all pleasantly surprised.

Entering the Capital Stage theater itself gives you a hint of what is to come.  A very real looking wrestling ring designed by Ian Wallace occupies almost the entire stage area.  With the addition of sound by Greg Coffin, lighting by Steve Decker and those razzle-dazzle costumes by Lalena Hutton (in addition to a guy in a scary wrestling mask sitting in the audience on opening night), it is quickly easy to imagine yourself at a real pro-wrestling event.

Macedonio Guerra (Andrew J. Perez), known as Mace, is  the play’s narrator. He’s a guy you would never pick out of a crowd as a wrestler, yet he is the true hero of most of the wrestling events.  He has perfected the art of the fall guy, making the big guys, who are often not that skilled, look good.  They get the fame and the big bucks, while Mace gets the satisfaction of having created a wonderful experience for the audience in a sport that he has loved since his childhood.

His love for wrestling grew since he was a young Puerto Rican kid glued to the TV in his Bronx home on Saturday mornings. He loves professional wrestling for its artistry and he really doesn’t care that nobody knows who he is...or what he does to give them a fulfilling experience.

Mace is the heart of this play, his love of wrestling pouring out of his body while he delivers lengthy monologues and leaps about the stage and up onto the ropes and shows how he lets the big guys give him body slams, without really getting hurt. Perez gives him the heart and the enthusiasm that the part requires.  His performance is riveting.

It is Mace’s job to make THE Wrestling’s Star, Chad Deity  look good. The golden-clad Deity (Donald Paul) is the ideal wrestling champion – a tall, handsome, muscle bound, arrogant African American who knows he exemplifies the name he bears.  Problem is Deity can’t really wrestle and isn’t all that bright and it is only because of Mace that he has achieved the awards and the following that he has.

Mace shakes things up when he finds a neighborhood kid, Vigneshwar Paduar (Rushi Kota) into the mix V P, as he calls himself is an Indian American boy from Brooklyn, who looks Middle Eastern and EKO exploits the ethnic diversity to turn him into “The Fundamentalist,” a bin Laden look-alike whose entourage includes a wall of dancing Muslim women in burquas projected onto the wall.

Inevitably, the plot builds to a climactic match between Deity and V P, and guided by Mace, the audience reacts appropriately to the description of the match taking place.

At the end of the play, I had seen more wrestling than I had in my life and had a strange desire to watch a “real” wrestling match on TV.  The show was great fun, tautly performed by four extraordinary actors (none of whom, amazingly, seem to have any bruises on their bodies!)
Posted by Bev Sykes at 9:24 PM