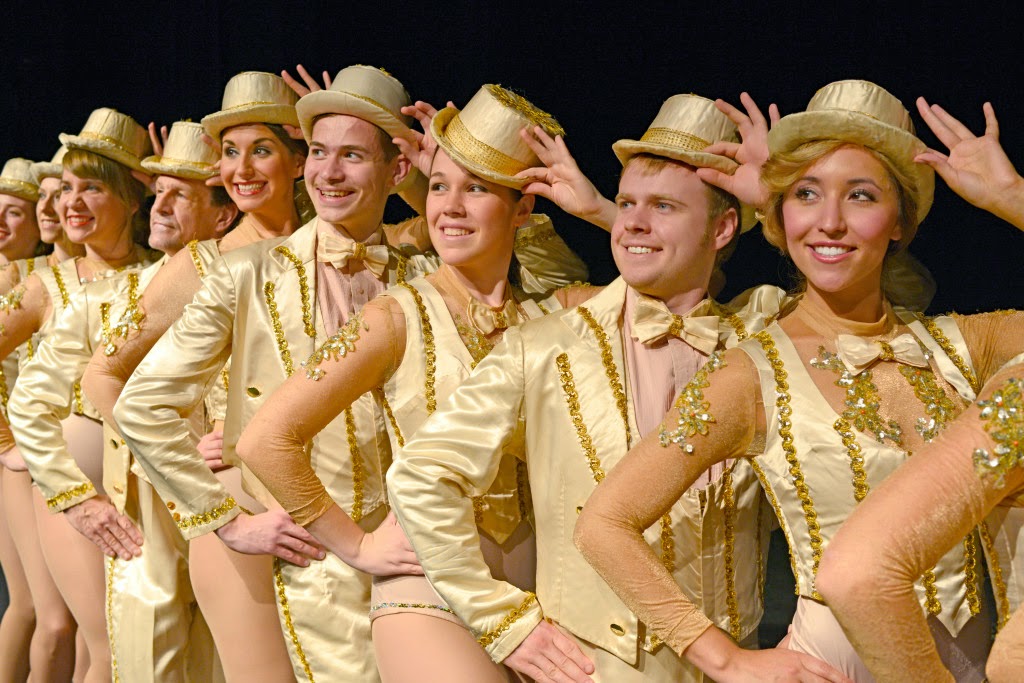 There is one singular sensation out at the DMTC Performing Arts Center, as the Davis Musical Theater Company presents its latest production of “A Chorus Line,” directed by John Ewing, with choreography by Pamela Lourentzos.

Before the show started, co-producer Steve Isaacson was delighted to announce that as a result of a successful internet fund-raising campaign DMTC was able to afford more realistic mirrors on the stage, and what a difference it made!  When those mirrors rotated around to face the audience, there was a literal gasp at how wonderful it looked.

For those unfamiliar with this show, it is not your run of the mill plot show.  There is no boy-meets-girl story, and while the finale is triumphant for some, not for all.  There is also no “star” of the show.  It is a show which depends on a very strong ensemble, which is precisely what director Ewing has assembled for this production.

The show takes place in one day, at a cattle call for dancers for an upcoming unnamed Broadway show.  Twenty three dancers show up for an audition for eight roles, and they go through not only a 2 hour grueling dance audition, but also must plumb the depths of their psyches to convince director Zach (Dean Shellenberger) that they would work well in this show.  Most will be eliminated.

When Diana (Rachelle Jones) sings the show’s signature song, “What I Did for Love,” near the end, the audience has a very good idea of what exactly singers, dancers, and actors do for love in order to perform.  Jones’ rendition of this song is very moving.

The opening number, “I Hope I Get It” blends brash optimism, fear, and insecurity, as each dancer expresses his or her hopes for finally landing a job.

Part of the audition process involves answering some very pointed questions about the dancers’ past lives, and their responses take us through the songs of this Marvin Hamlish-Edward Kleban musical.

Mike (Trey Quinn) tells of being dragged to his sisters dance classes as a young boy, falling in love with what the students were doing, and, on a day when his sister couldn’t get to class, stealing her shoes and running to take her place. And there he stayed “for the rest of his life.”

Bebe and Maggie (Rebecca Crebbin-Coates and Cooper Johnson) sing the lyrical “at the ballet,” remembering their days dancing ballet and how it saved them from unhappy home lives.

The cute, but not very talented Kristine (Jessica Arena) and her new husband Al (Scott Scholes) try to explain Kristine’s problems with staying on tune.  (It is worth noting that the role of Al in the 1985 movie was played by the late Tony Fields, a Davis High graduate)

Caitland Martin plays the over exuberant, sensual Val whose career has been plagued not being a beauty, no matter how talented she may be (“Dance: Ten, Looks: Three”)

Cassie (Christina Castro) is Zach’s former mistress, who left the chorus line to have a career as a solo performer.  With the lack of success, she is back trying to get into the chorus.  Zach is particularly harsh with her and Castro emotes effectively in her song “The Music and the Mirror,” as she tries to explain that this is all she has now.

Sheila (Jori Gonzales) has a tough exterior which hides her own insecurities.  When Zach insists she let her hair down (literally), she begins to open up.

Devon Hayakawa plays Connie, a role played in the movie by Davis’ Jan Gan Boyd.  Hayakawa is the youngest in the cast, but you’d never know it.  She is easily on a professional level with the rest of the cast.

But if the evening went to one performer in particular it was to Peter Giovanni, playing Paul, a painfully shy man hiding a secret he dares not to reveal to the cast at large.  Giovanni gives such a poignant performance that it moves the audience to tears.

In truth, it is Paul’s secret (he’s gay) which dates this musical.  In this day and age, nobody would care, and I suspect Paul would not be quite so pitiful, but in 1975, when the play opened on Broadway, we were still three years before Harvey Milk was elected to public office in San Francisco, and several years before anybody ever heard of AIDS.  “Gay Pride” was unheard of.

Given that, it may be surprising that “A Chorus Line” won nine Tony Awards that year and went on to be the longest running musical in Broadway History (15 years), until it was dethroned by “Cats.”

But the show’s appeal cannot be denied.  And when the cast assembles on stage, dressed in gold and white and standing in front of those gorgeous mirrors, it takes your breath away.  Rockette precise they’re not, but oh so all but.

DMTC knocks it out of the ballpark with this production.!

The director should have left the performance with a paper bag over his head. Aweful just aweful.

I love how people who want to criticize always do it anonymously. You and I must have seen vastly different performances.

The director did a poor job. I felt badly for the very talented actors.

People will have to decide for themselves. I disagree with your (again, anonymous) comment. Of course, you did say the show is "aweful" (which would mean "full of awe, not "awful," which would be very bad), so maybe you meant it as a good thing.

Sorry Bev but in my opinion, the directing was bad, or actually awful.