Funny Thing Happened on the Way to the Forum 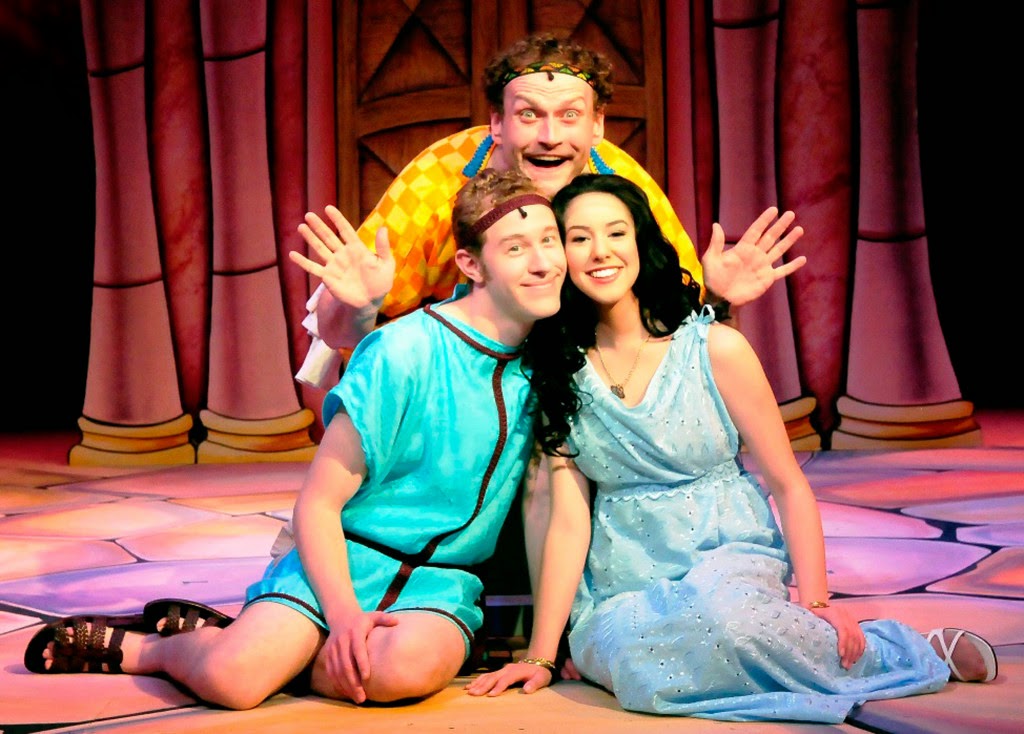 A sparkling new production of “A Funny thing Happened on the Way to the Forum,” directed by Michael Laun, exploded onto the Sacramento Theater Company stage over the weekend and left the audience weak from laughter.

Described by Laun as “perhaps one of the most brilliantly conceived musical comedies ever written,” “Forum” has not been seen on the STC stage since the 1981-82 season. The show almost never saw the Broadway stage, due to a plethora of problems.  Jerome Robbins was hired to direct, but then dropped out of the show.  Phil Silvers was expected to star, but refused (as did Milton Berle who felt the performance schedule was too rigorous).  Finally Zero Mostel was cast and George Abbot hired to direct, but when the show was not working in its out of town performances, Robbins was brought back to fix it.  But there was bad blood between him and Mostel (who never forgave him for “naming names” during the period of the Black List.  In fact Mostel and Jack Gilford, also in the show, had both been blacklisted and Gilford’s wife–“the sweetest lady in the world,” according to Mostel – was also named).

However, realizing that Robbins would be good for the show, Mostel agreed to work with him as long as he didn’t have to socialize with him.

Stephen Sondheim's most tuneful musical is a madcap musical sex farce set in ancient Rome and based on the comedies of Plautus (254-182 BC).  The book is by Burt Shevelove and Larry Gelbart with musical direction (and recorded music) by Samuel Clein and choreography by Scottie Woodard.  As the lights go up on Scenic Designer Kelly James Tighe’s massive set featuring three buildings, many doors and many exits, one does not have to wonder what kind of show is about to be presented.

The intent of the play is clear from the moment Prologus (the incomparable Michael RJ Campbell), who later plays the slave Pseudolus, introduces the action with the hit song from the show, “Comedy Tonight.” As the song progresses, other characters are introduced and demonstrate their importance to the plot

Most memorable of these initial characters are the courtesans in the house of Lycus (Jeffrey Lloyd Heatherly) – Tintinabula (Lindsay Kristine Anderson), Panacea (Jennifer Martin), The Geminae (Gina Coyle and Kevin Foster), Vibrata (Andrea St. Clair) and the towering Gymnasia (Renee DeGarmo).  The gyrations over, under, and around Pseudolus are memorable.

Campbell dominates as the slave who will do anything to win his freedom.  His wing man is Hysterium (Scottie Woodard, who gives an aptly named performance!)

Pseudolus is slave in the house of Senex, an old man, played by Joe Vincent, returning to the Sacramento stage after an absence of 50 years.  He has obviously aged well.

His wife, Domina, is the delicious Lenore Sebastian, alternately harpie and seductress and with the help of an incredible wig makes it believable, as the song states, that she will be playing Medea later this week.

Their son Hero (Matt Surges) is feeling the stirrings of puberty and has fallen in love with the beautiful, yet vacuous Philia, a virgin (Megan Odell on the night I saw the show, alternating with Meghan Greene, both of whom are part of the Young People’s program).  Philia has been brought to Rome to be sold to the Miles Gloriosus (Jacob L. Smith) and has been programmed to give her body to her owners, but her heart remains with Hero, an arrangement that doesn’t really sit well with Hero.

When Jacob L. Smith as Miles Gloriosus strides onto the stage to claim his bride, he was making his STC debut and the audience was blown away by his powerful voice. He’s the perfectly cast self-centered “hunk” for this play!

Jim Lane plays Erronius, an old man who is roaming the world looking for his two children, stolen in infancy by pirates.  Lane’s role is a small (though pivotal) one, but each time he comes on stage, he garners gales of laughter.

Matt Dunn, Gina Coyle, and Kevin Foster are “the proteans,” or “everybody else,” playing males and females. soldiers and eunuchs each with a quick change of costume and adjustment of vocal level.

This play has everything needed to make it enjoyable – funny characters, funny situations, mistaken identities, endless chases...and a happy ending, of course.