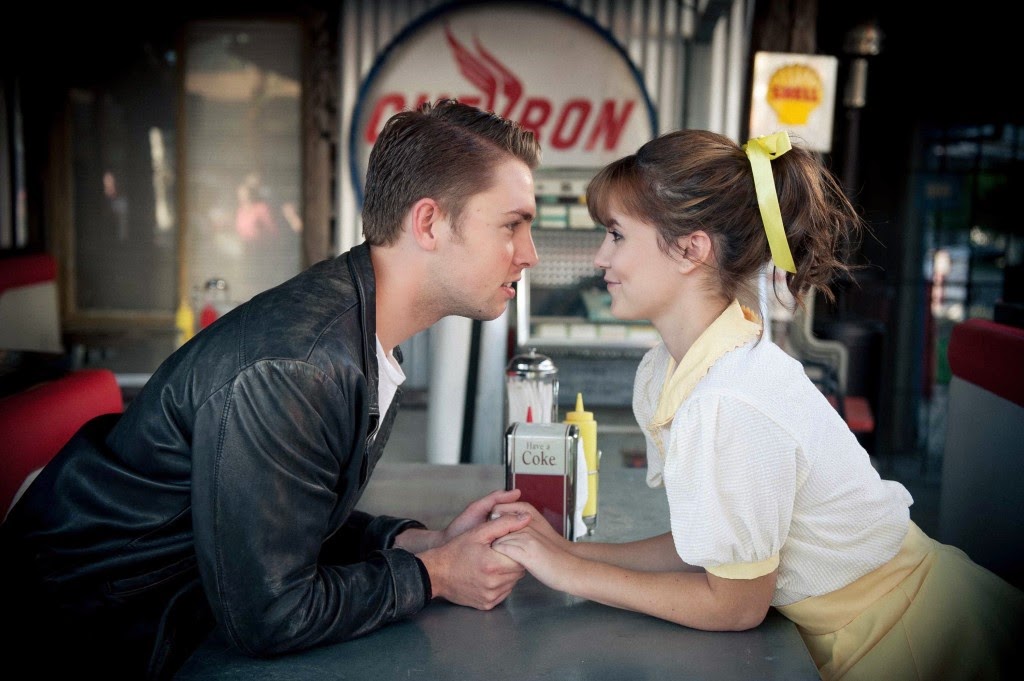 The Woodland Opera House sounded like the gymnasium of Rydell High School as the full house cheered, shrieked and wildly applauded the talented cast of “Grease,” that 1971 musical by Jim Jacobs and Warren Casey that spoofs high schools of the 1950s (the story is set in 1959).

I will say at the start that this is a spirited production filled with outstanding performances, but I always have difficulty with this show. I like the show and I hate the show. I like it because it has wonderful musical numbers like “Greased Lightnin’,” “We Go Together,” “Born to Hand Jive” and “Look at Me, I’m Sandra Dee.” It has great dance numbers (handled beautifully by choreographers Crissi Cairns and Angela Baltezore).

But I hate the message. Sandy (McKinley Carlisle) met Danny (Donovan McNeely) over the summer and the two fell in love. But when school starts, she’s the new kid, and he’s the head “greaser” and is too cool to admit he likes her.

She joins the “Pink Ladies,” who would have been the “bad girls” in my 1950s high school. They’re the ones who smoke, drink and sleep around, yet you can’t help liking them. Not sure why they admitted Sandy, who has high moral values, dresses conservatively, doesn’t smoke or drink and doesn’t even have pierced ears (which, in my school in the 1950s, was a sure sign of a “bad” girl!).

Yet by the end of the show she realizes her only hope of being accepted by the Pink Ladies and Danny is for her to frizz her hair, put on skin-tight leather and lots of make-up, pierce her ears, start smoking and in general look like a slut. Or, as someone put it to me recently “A happy ending means changing yourself and compromising your morals for a guy.”

Then we can sing a reprise of “We Go Together” and everybody lives happily ever after.

Ironically, the popular film with John Travolta and Olivia Newton-John (which I watched when I got home from the matinee!) gave it a kind of O. Henry ending, with Danny changing to please Sandy and Sandy changing to please Danny. The original stage show does not do that.

That said, let’s get to the actual Woodland production, directed by Crissi Cairns, which is lots of fun. Carlisle is both the virginal Sandy and the bad girl Sandy and plays both full out. McNeely nicely balances the softy who fell for Sandy and the tough guy who has to cover up his feelings so his friends won’t think him weak.

Rizzo (Gabby Delgado) is the head of the Pink Ladies, a gruff, hard-edged girl who obviously has had a hard life and now is faced with a possible pregnancy she didn’t anticipate. She has the right attitude for the role, yet she managed to show her vulnerability as well.

Amy Miles plays Frenchy, who can’t quite make it in high school and only wants to be a beautician … and then discovers she can’t make it in beauty school either. She gets help from a Teen Angel (Sean Covell) whom she sees in a dream and who encourages her to go back to high school.

Marty (Abby Miles) has an eye for older guys and flirts shamelessly with slimy radio disc jockey Vince Fontaine (Mike Maples), who comes to Rydell to do a show from the boys’ gym and maybe get a little action on the side.

Emily Jo Seminoff, who has a long history with the Woodland Opera House, and other local theaters, is the always-hungry Jan. As usual, Seminoff lights up the stage and it is always such a pleasure to see her perform.
Horacio Gonzalez nailed the role of Danny’s best friend, Kenickie, and gave us an exuberant “Greased Lightnin’ ” in displaying his new/old car.

Tomas Eredia as Sonny stood out from the rest of the Burger Palace Boys. He’s obnoxious and the first one to make fun of someone, but Eredia’s performance makes him likable despite it.

Dalton McNeely is Roger, who has a thing for Jan, and is the buffoon of the group. His solo, “Mooning,” was very funny.

Seth Rogers rounds out the quartet as Doody, foolish and gullible.

You can’t have a high school story without the dweeb, and Cameron Turner as Eugene fits the bill to a T. His ruffled shirt for the high school dance (Denise Miles is the costume designer) was particularly fetching.

The program, printed to look like the Rydell High newspaper, is cute, but there wasn’t enough room to list the band, which is too bad because they did an excellent job under music director Lori Jarvey.

This is a show I really want to dislike, but when you have a good production like Woodland’s, that’s difficult to do. This show has been a popular favorite of community theaters and high school productions for decades and it’s easy to see why, though its message will always make me cringe.
Posted by Bev Sykes at 4:20 PM