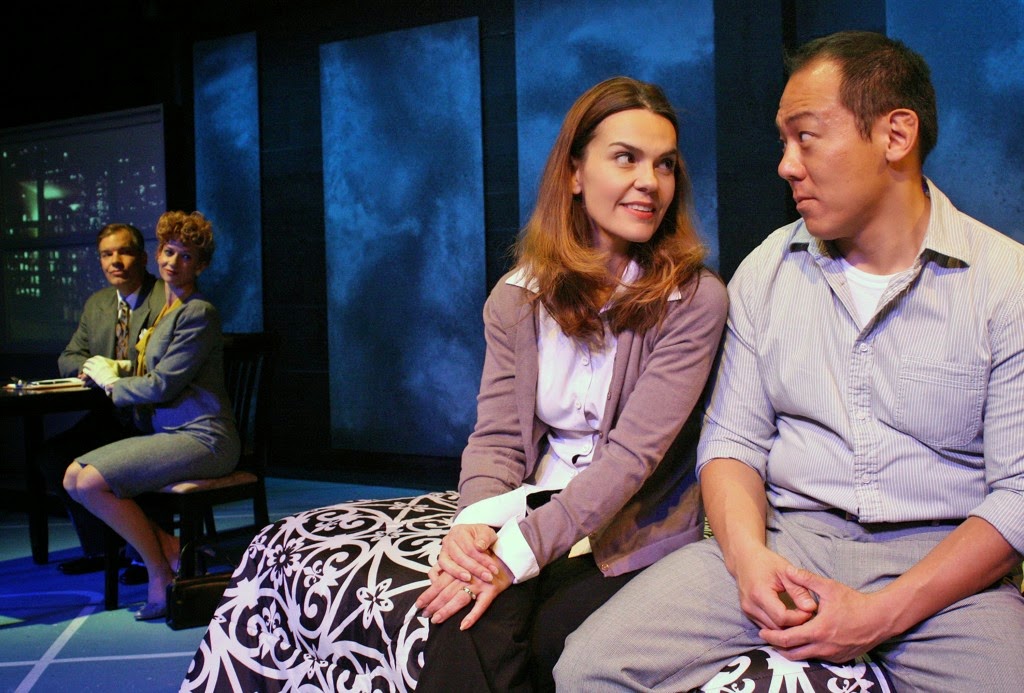 Do you ever feel overwhelmed by a world that is filled with hundreds of emails, tweets and Facebook status updates; a world where the 40-hour work week is no more; where many are working 80 hours a week and consider that normal?

Is the stress getting to you, buddy?

Well, Capitol Stage’s “Maple and Vine” by Jordan Harrison, directed by Peter Mohrmann, may be just the escape you need. “May” being the operative word here.

Katha (Stephanie Gularte) an executive with Random House, and Ryu (Wayne Lee), a successful plastic surgeon, are a power couple living in New York but feeling the pressure of their jobs and the emptiness in their lives after Katha’s miscarriage a few months before.

Enter Dean (Jason Heil) and Ellen (Shannon Mahoney), a couple from the Society for Dynamic Obsolescence, a group of 1950s re-enactors who live in their own compound where every day is 1955, there are no cell phones, or computers. A time when wives didn’t worry about finding themselves because their job was to run the house and raise the children while fathers brought in the money.

Ryu is unsure about giving things a try, but Katha is enthusiastic and to save their marriage, he agrees to go along.
Hints of problems surface when Dean and Ellen refer to them as a “mixed-race couple” (Ryu is Japanese, though born in Long Beach) and say they will have to move to an area where mixed-race marriages are tolerated.

“We have everything in microcosm, yes. So there are areas with the spirit of the south and areas that have more the feeling of the north.”

Katha (who changes her name to Kathy to blend in more with the community) and Ryu begin studying 1955 so they can fit in better. They acknowledge that sometimes things will be bad and agree that if they need to remember the 21st century they will use a safe word — they decide on “Hillary Rodham Clinton.”

Ryu gets a job working in a box factory for floor boss Roger (Ryan Snyder), who is forever making references to Ryu’s Japanese ancestry.

The second act is more uneven than the first and sends the audience off in all sorts of directions — sexism, homophobia, racial bigotry. Kathy uncharacteristically instructs the members of her neighborhood about how to be intolerant of her Japanese husband in order to make the 1955 experience more authentic: “We don’t expect flaming crosses on our lawn; that would be out of proportion. But here are some ideas. You might stare at me in the supermarket. You might tell Ryu how much you like Chinese food. Your teenage boys could bang trash can lids outside our house … I know that we’ll be able to find even more ways to give each other an authentic experience.”
The big surprise reveal toward the end of the show comes from left field and leaves one wondering what is going to happen to these people as they grapple with 2014 problems in 1955.

The ensemble for this show is marvelous. Gularte gives an outstanding performance, both as the 2014 executive and the 1955 Stepford-ish wife, embracing all of the simplicity of an earlier time and even embracing the negative aspects of it.

Lee is wonderful as a man with a sardonic secret — that he’s really a plastic surgeon, when everyone else accepts him as a box maker, but so in love with his wife that he’s willing to follow her into this wacky old world.

Heil is a smarmy salesman who has an answer for everything and could sell refrigerators to Eskimos, though he doesn’t always practice what he so eloquently preaches.

Mahoney is a marvelous throw back to June Cleaver, the perfect 50s wife, while hiding a big secret.

Snyder is wonderfully campy in Act 1 as Katha’s gay co-worker, and in Act 2 barely conceals his feelings of superiority to a man he thinks is an Asian refugee unable to do more than put a box together.

This is billed as a comedy, and it is very funny, but it goes beyond comedy into areas you never expect to explore by the time it ends, and will give the audience something to think about long after the final bows have been taken.
Posted by Bev Sykes at 5:39 PM