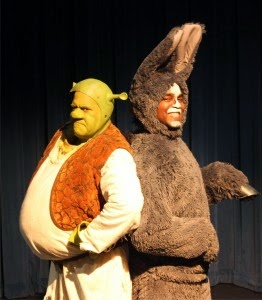 The Davis Musical Theater Company has opened a lively, splashy, thoroughly enjoyable production of “Shrek, The Musical,” directed by Steve Isaacson and with choreography by Ron Cisneros. This is a show that is sure to be a hit with audiences of all ages. In fact, the full house on opening night was a nice mixture of children, parents and older adults, all laughing and applauding enthusiastically.

Based on William Steig’s book “Shrek!” and the DreamWorks animated film, this is the story of everybody’s favorite ogre, with the message that everyone is worthy of true love. It is filled with familiar nursery-rhyme characters, double entendres, great costumes, fun dance numbers, and more belch and fart jokes than I’ve ever seen in one show before.

This is not an instant stage classic that we will be seeing again for decades, nor does it have memorable music (except for the closing number, Neil Diamond’s “I’m a Believer”). But for what it is, it delivers.

Essential to the success of any production of “Shrek” is an actor who can convincingly become the title character. DMTC is blessed with the talented Kevin Caravalho, who is so convincing you’re surprised to discover there is a real man under all that padding and green make up. I would be hard-pressed to think of any actor who could do better with this role. This production is worth seeing if only for Caravalho’s performance.

Fortunately, Caravalho is backed up by a host of equally talented performers. There is hardly a weak link in the massive cast. Shrek’s sidekick is Donkey, played for all the broad comedy the role requires by David Ewey, despite some costume problems opening night (it’s hard to hold your ears on straight when you have hooves, not hands, to work with!) Despite the costume malfunction, Ewey was consistently funny, worming his way into curmudgeonly Shrek’s heart, whether the ogre thinks he wants a friend or not.

Travis Nagler is the diminutive Lord Farquaad, scheming to make Princess Fiona his bride so he can become king and steal her kingdom. The actor does well playing the role on his knees, with fake legs dangling in front of him. He is even able to dance.

Jessica McKillican plays an enthusiastic Fiona, thrilled to be released from the prison where she has spent her entire childhood, confused about who Shrek really is, but eager to meet her intended husband to be … and also hoping to keep her own secret hidden. No shrinking violet, this heroine is equal to Shrek in every way.
Lizzie Carey and Mia Piazza play Fiona at young and teen ages and the transition from one age to the next is done flawlessly.

Jonathan Kalinen is very funny as Pinocchio and his growing nose was hilarious. My only problem with him is that his high pitched voice sometimes made it difficult to understand him.

This is also a three-generation production, with Mary Young playing several roles, including Mama Shrek, who sends her young son off to live on his own. Daughter Wendy Carey Young is Gingy, the Gingerbread man, and Lizzie Carey is Wendy’s daughter and Mary’s granddaughter

There are some outstanding dance numbers in this production, particularly by the Duloc Dancers in incredible costumes rented from the Theatre Companyof Upland. 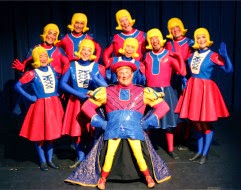 Fiona also does a wonderful dance number with the Pied Piper, played by Tomas Eredia, and his rats.

The marvelous dragon (her name is Donisha, Director Isaacson tells me), was designed and built by River City Theatre Company and lent to DMTC by Granite Bay High School. She swoops and flies and turns in circles on stage and is amazingly believable.

This is another winner from DMTC and should be popular with everyone. Kids in particular will love the bright costumes and the chance to see a “real” dragon. By the end of the show, everyone will want to give the lovable ogre a big hug.
Posted by Bev Sykes at 11:16 AM