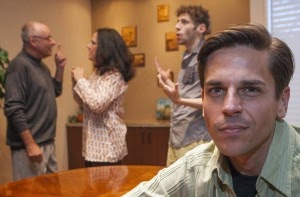 What does it mean to “hear”?

Can you hear if you are deaf, by understanding the world around you through lip-reading or sign language? Can you be deaf to those loudly speaking around you, though your hearing is just fine? Can you hear with your eyes, reading what others are signing?

These are some of the questions explored by playwright Nina Raine in her powerful play, “Tribes,” now at Capital Stage in Sacramento, under the direction of Jonathan Williams.

It is the story of a dysfunctional Jewish British family, headed by parents Christopher (Lol Levy), a retired academic, and Beth (Jamie Jones), a wannabe writer. Their grown children are , Daniel (Benjamin T. Ismail), who is writing a thesis arguing that language doesn’t determine meaning; Ruth (Elizabeth Holzman), an aspiring opera singer; and Billy (Stephen Drabicki), just home from university.

Sylvia (Brittni Barger) is the woman who enters their lives and turns long-held perceptions on their head.

As the play begins, the family is seated at the table, engaged in an argument. There are actually several arguments going on, each seemingly nastier than the next.r whines continually that he can’t find any good nuts in the nut dish, while Daniel is upset because Ruth is dating a man nearly her father’s age. Daniel is also upset that all of his grown children are still living at home with their parents and repeatedly asks when they are going to move out.

Daniel whines continually that he can’t find any good nuts in the nut dish, while Christopher is upset because Ruth is dating a man nearly her father’s age. Christopher is also upset that all of his grown children are still living at home with their parents and repeatedly asks when they are going to move out.

The F-word is sprinkled liberally throughout the play.

Through all the cacophony of the arguments, Billy sits calmly, reading, his back to the audience. Through dialog of the others, we learn that Billy is deaf, but he is proficient at lip-reading. In fact, we learn later, he knows nothing of sign language, because his parents didn’t want to raise him to be handicapped.

This becomes a major theme of the play when Sylvia, who is losing her hearing, enters the picture and attempts to teach him how to sign. Billy begins to realize that life can be lonely and frustrating when he has to rely on lip-reading, but that his social life opens up significantly when he becomes part of the signing community.

The actor playing Billy is crucial to the emotional arc of this play and Drabicki, who played the role in the Canadian premiere of the play, is perfect. A hearing-impaired actor himself, and member of the New York Deaf Theater and the Association of Musicians with Hearing Loss, he embraces the conflicting emotions of a deaf man living in a hearing world and the complicated relationships within his own family.

I found that I wondered how difficult it must be to learn to speak with a British accent when one is hearing-impaired.

Barger, as Sylvia, beautifully conveys the strain she is under, as the child of deaf parents who is now, in her adulthood, losing her own hearing. She becomes the translator for both the hearing and deaf members of the family.

As Billy moves deeper and deeper into the signing world, this production adopts a beautiful artistic quality, as the words that are projected on the wall to translate for non-signers in the audience have an almost choreographed quality to them.

Other members of the cast are equally strong, with Ismael’s Daniel outstanding as he fights the voices in his own head and displays his own mental problems, though his love for his brother is painfully apparent.

One scene particularly displays the worlds in which each brother is living, when Christopher turns on the radio to help drown out the voices in his head and Billy begs him to turn it off because it causes buzzing in his ear through his hearing aids.

Director Williams has molded a complex family whose emotions, whether they are loving or angry, are over the top and which shows each member in his or her own little tribe, keeping the others out.

By the end of the play, we might all be questioning how we relate to others, and whether we are really communicating as clearly as we think we are.
Posted by Bev Sykes at 3:09 PM