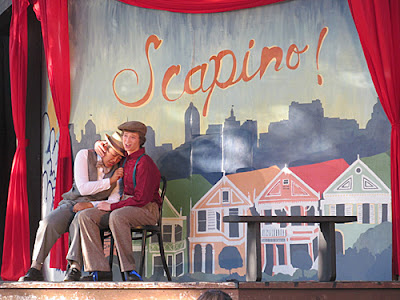 If you’re in the mood for an hour and a half of zany, slapstick fun, there’s still time to catch the free performance of Acme Theatre Company’s “Scapino,” on the outdoor stage at the Davis Arts Center.

“Scapino,” adapted from the original Moliere play, was written by actor, clown and comedian Bill Irwin and humorist Mark O’Donnell. Originally a 16th-century Commedia dell’arte production, it is not surprising that this modern comedy is funny from start to finish.

With pirates, stolen babies, mistaken identities, overbearing mothers and conniving heroes, all this show is missing is music to place it right in the Gilbert & Sullivan vein!

As director Maddy Ryen comments, “ ‘Scapino’ is not a comedy with a lot of depth. It’s heavy on the commedia slapstick and our production … aims to evoke as much of an old-time vaudeville feeling as we can.”

The program explains that it’s set in San Francisco, though other than a backdrop of the Victorian “Painted Ladies,” you’d never know it.

With only 12 people in the cast, this may be the smallest of the annual Acme Memorial Day shows, but the small cast was able to devote more time to perfecting the roles.

Rocket Drew, in the title role, is perfect as the wily rapscallion who plays both ends against the middle, nearly seamlessly. When Octavio (Meili Monk) confesses that he has fallen in love with the lovely Hyacinth (Eleanor Richter), though his mother has already arranged a marriage for him, he turns to Scapino for help.

In the meantime, Scapino’s boss Leander (Isaiah Darshan) has fallen love with the pirate girl named Zerbinetta (Bella Houck, who may have been cast for her ability to laugh endlessly on cue!), and knows that his father is going to be furious. He, too, turns to Scapino for help.

Scapino is aided in all of his machinations by his pal Sylvester (Sarah Zaragoza-Smith). Throughout her history with Acme, Zaragoza-Smith has played a number of pint-sized spitfires and this works extremely well for her in this production.

Actress Maddie Olwert wrote in her bio that she is always cast as “fancy and opinionated elderly women.” Maybe it’s because she’s so good at it. She plays Octavio’s mother, Madam Argante, determined to make the right marriage for her son, partly because of a big secret that is revealed toward the end of the show.

Making the zany antics just that much more zany are the “Zanni,” a trio of music makers — Patrick Foraker, Mikaela Manzano and Maya Tripathi — who play slide whistles, tambourines, blocks and a host of other noise makers to accentuate the action on stage.

Little kids will love this show even if they can’t figure out what is happening, but there is so much visual comedy going on, one doesn’t need to understand the thin plot, which becomes much easier to follow by Act 2. Adults will love the comedy, the corny jokes and the subtle references to current pop culture.

With a barbecue outside the Arts Center starting at 5:30 p.m. and the free show beginning at 7, this is an early evening, but lots of fun for all. Bring your chairs and/or blankets to sit on the grass, and don’t forget a sweatshirt when the sun goes down.
Posted by Bev Sykes at 1:00 PM