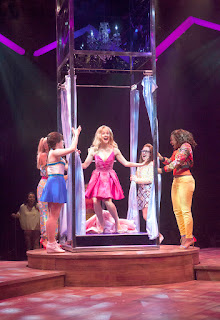 Omigod, you guys! Elle Woods is at Music Circus this week!!

“Legally Blonde” (music and lyrics by Laurence O’Keefe and Neil Benjamin and book by Heather Hatch) is as light and frothy as cotton candy — and just as pink. It has all the story of the movie with Reese Witherspoon, but without the depth.

The songs aren’t memorable (except for the opening and recurring “Omigod You Guys”), but the cast is so enthusiastic and the dancing so infectious that you find yourself enjoying it in spite of yourself.

This particular production, directed by Michael Heitzman, is extra-special for a reason that I suspect few in the audience realize. The cast includes a member of the original Broadway cast, coming out retirement for one last production.

Chico plays Elle’s Chihuahua, Bruiser, and is very professional. He’s trained by William Berloni, a 2011 Tony honoree for excellence in theater and the trainer for just about any animal appearing on Broadway, starting with the original Sandy in the first production of “Annie.”

Chico (his understudy Roxie is also a Broadway veteran) didn’t miss a cue, made all of his exits, barked on command and performed his big moment, running across the room, jumping onto a bed and into a dog carrier, flawlessly.

Co-starring with Chico is Lauren Zakrin, as Elle Woods, who looks like a Barbie doll and acts like an air-headed sorority girl, until circumstances teach her that she has more brains than she gives herself credit for and that her life does not have to center around a handsome boy to be complete.
Instead of asking her to marry him, as she expects, Elle’s boyfriend Warner (Jordan Bondurant) breaks up with her, now that he is on his way to Harvard and a successful career. He doesn’t feel she would fit into the world that he imagines for himself.

With all the casualness of someone ordering dinner from a menu, Elle decides to go to Harvard Law School, too, and win Warner back.

Not surprisingly, she finds Harvard harder than anticipated, especially when taking a class from the strict Professor Callahan (Paul Schoeffler), who dangles four internships in front of his class and makes Elle finally get serious about her studies.

Emmett Forrest (James Michael Lambert) is the class T.A. who takes Elle under his wing, helps her buckle down and actually study … and falls in love with her in the process.

Along the way, she makes friends with beauty shop attendant Paulette Bonafonté (Ryah Nixon) and the two women become support for each other. Elle teaches Paulette the delightful “Bend and Snap” as a way to win the heart of the UPS guy Pforzheimer (Adam Lendermon). Lendermon is a man of few words, but definitely makes an impact.

Outstanding is Grace Stockdale as Brooke Wyndham, falsely accused of murdering her husband. Brooke is a famous exercise instructor and her “Whipped into Shape,” sung with an exercise class in prison, is a show-stopper.

There is a trial that takes place, during which some stereotypical gay sight gags went on far too long. I found them offensive, especially so soon after the Orlando massacre, though the audience laughed uproariously.

Eric Anthony Johnson makes the most of the small role of Carlos, whose appearance at the trial changes the course of things.

On the whole, Heitzman’s direction is fine, with such a big cast on such a small stage, but he occasionally has characters performing scenes facing in one direction so that our part of the audience saw them only from the back.

Lighting technicians, too, need to watch timing, as on more than one occasion, they brought up the lights too quickly, exposing the usually invisible set crew to the audience.

This is “Legally Blonde’s” debut performance at Music Circus and sets the stage nicely for a fun season with three more debut shows and two old chestnuts still to come.
Posted by Bev Sykes at 11:53 AM