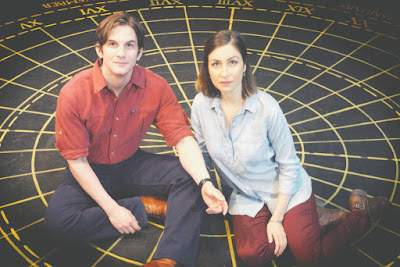 “Constellations,” by Nick Payne, now at the B Street Theatre, talks about the unlikely play topics of relativity, quantum mechanics and string theory. It’s like “The Big Bang Theory” without the laughs.

The show examines the possibility of parallel universes — or not so much universes but paths: what might have happened if you had not gone to that party, or said that thing, or stayed with that person, or turned left instead of right at the intersection.

It’s difficult to explain in this quite odd, quite different, yet surprisingly engaging show.

“Constellations” examines what might have happened in these and other instances by following the relationship of Marianne (Dana Brooke) and Roland (Tom Patterson), who enter this “multiverse” and travel through it.

The backdrop on the stage is a star field showing various constellations, which light up each time the couple changes paths.

Marianne, a scientist at Sussex University in the field of quantum cosmology, first meets Roland, a bee keeper, at a barbecue where she breaks the ice by telling him why it’s impossible for human beings to lick their elbows. Roland blows her off. Suddenly we hear a ding, a different constellation lights up and the same conversation takes place, with a different reaction on Roland’s part. Another ding and the same scene is played a little differently again.

This is the “multiverse,” which, over some drinks at a bar, Marianne explains is the hypothetical collection of infinite alternate universes existing alongside the one we perceive as reality. It’s all part of general relativity, quantum mechanics, and the various string theories that connect them.

“Let’s say that ours really is the only universe that exists,” Marianne explains to Roland. “There’s only one unique me and one unique you. If that were true, then there could only ever really be one choice. But if every possible future exists, then the decisions we do and don’t make will determine which of these futures we actually end up experiencing.”

Well, don’t worry, somehow it works to create a complicated yet beautiful relationship between these two likable people playing out the various possibilities in their lives. They go for a drink, or maybe they don’t. They fall in love and live together, but break up, or not. They have a chance meeting and feelings are still there, but Marianne is engaged, or maybe Roland is married. Maybe their time together will be tragically short.

The juggling of time periods and emotions requires excellent actors who can change the whole mood of a scene from flirtation to courtship to infidelity, to joy, illness and heartbreak, just by a slight shift in posture or a look in the eye. It’s really quite remarkable.

This show will not appeal to everyone, but it’s really a fascinating piece of theater, performed by two talented actors, and just think — if you happen to meet another B Street patron at a barbecue, “Did you see ‘Constellations’?” is a lot better conversation starter than “Do you know why it’s impossible for human beings to lick their elbows?”
Posted by Bev Sykes at 6:20 PM