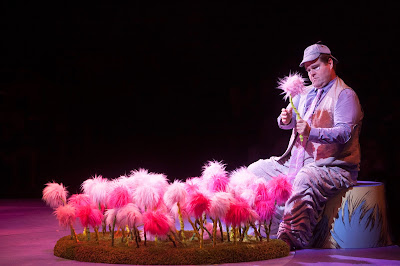 “Oh the things you can think
“When you think about Seuss.”

The audience at the Music Circus were all thinking about Dr. Seuss when “Seussical” burst upon the stage of the Wells Fargo Pavilion, like being shot from a circus canon. With costumes by Kate Bergh and the wonderful puppets of Richard Bay, all of your favorite Dr. Seuss characters came to life in a cacophony of color and music.

“Seussical,” by Tony award nominees Lynn Ahrens, Stephen Flaherty, and Eric Idle centers on three of Theodor Seuss Geisel’s best loved stories, “Horton Hears a Who,” “Horton Hatches the Egg” and “Gertrude McFuzz,” but pulls in characters from many of Seuss’ other stories as well.

It is all orchestrated by the irrepressible Jason Graae, the Cat in the Hat, who acts as a sort of ringmaster for the scenes that are to follow. With a delightful twinkle in his eye, Graae is mischievous and fun to watch.

The heart of “Seussical” is Horton, the elephant, played by John Treacy Egan in a marvelous baggy pants suit with a long tie as his trunk. You can’t help but fall in love with Horton, filled with gentleness and a genuine heart, who cares for everyone and always keeps his word, no matter how uncomfortable it makes him.

Early in the show, he discovers Whoville, the teeny tiny world of the Whos, who live on a big puffy dandelion. Though nobody else believes in their existence, Horton vows to help them save their world, in his own version of “Whos lives matter.”

Eleven-year-old Josh Davis, last seen at Music Circus as Michael Darling in “Peter Pan,” plays the young boy who meets the Cat in the Hat, and then morphs into JoJo, the son of the Mayor of Whoville (Jamie Torcellini) and his wife (Eydie Alyson). They don’t know what to do with a boy who thinks, so they send him off to military school run by General Genghis Khan Schmitz (Stuart Marland)

JoJo is a misfit in the military and has a beautiful duet with Horton, “Alone in the Universe,” as the two of them share their feelings of loneliness because they are “different,” and realize that they aren’t really alone.

The ever-helpful Horton agrees to egg-sit for selfish Mayzie LaBird (Ginifer King), while she shops for an hour. But she disappears and leaves him literally holding the egg for over year, protecting it from rain and despite the derision of everyone around him. He is going to keep his promise, no matter what, even though he is captured and put on display in a zoo. (“I said what I said and I meant what I meant. An elephant’s faithful 100 percent”)

Horton’s best friend, Gertrude McFuzz (Bets Malone) is a bird with only one feather in her tail, who is really in love with Horton. She gets her wish for a bigger tail, which causes problems she never envisioned and she learns how one has to be careful with wishes.

Sharon Wilkins makes an impact with her Sour Kangaroo, who doesn’t add much to the plot of the show, but certainly knows how to belt out a song.

Other beloved characters who appear are the Grinch (Seth Danner) and Yertle the Turtle (Eric Anthony Johnson).

Don’t look for a real plot in this show, but sit back and enjoy the color, the costumes, the puppets, and the music, which, while not particularly memorable, is fun in the moment.

Bring the kids; they’ll love it.

Thanks for posting this...I think we will have to look at the book/musical again with our homeschoolers this school-year. :-)