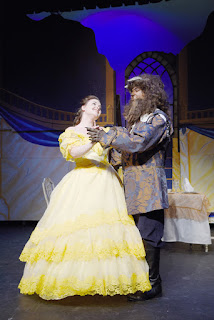 It was the lifelong ambition of Rachael Sherman-Shockley to play Belle in “Beauty and the Beast.” In this Davis Musical Theatre Company’s current production, she proves her ambition was a good one.

She is beautiful, warm, generous and loving, yet high-spirited and plucky. She sacrifices herself for her father and in the end falls in love with a hideous beast, for which she is rewarded with a handsome prince. She is a perfect Belle.

She sings well, too.

Celebrating its 32nd year of musicals, the DMTC production — directed and choreographed by Jan Isaacson — is a fun, colorful, occasionally opulent one, with good talent, beautiful costumes by the remarkable Jean Henderson and a great-sounding orchestra, under the baton of Steve Isaacson (also credited with set design).

It should be noted that, with the addition of a new stage floor, which changes the opening for the under-stage orchestra DMTC, seems to finally have gotten the audio right and the orchestra has never sounded better — or sounded more a part of what is going on on stage.

Joining Sherman-Shockley is a strong cast, which help make this a very good production. Coury Murdock handles the Beast role beautifully, remote and querulous, brooding in his lonely castle, with only the companionship of his staff, who are, themselves, in the process of turning into inanimate objects, as part of the curse.

The most endearing scenes are those in which the staff attempts to instruct the Beast in how to woo a woman.

Murdock delivers wonderful songs, but none so moving as “If I Can’t Love Her,” the Act 1 finale.

Mike Mechanick heads the staff as Lumiere, the maitre d’, who is becoming a candelabra. He is assisted by Cogsworth (Hugo Figueroa), the butler who is turning into a clock, and the housekeeper Mrs. Potts (Marguerite Morris) with her son Chip (Sophia Farwell) as a tea set. All three are delightful.

Morgan Bartoe gets high marks for her flirty “Babette,” the maid becoming a feather duster.

As for Madame de la Grande Bouche (Cyndi Wall), becoming a wardrobe, I have to wonder — with that huge skirt and high wig and jewelry, exactly what part of the house staff she was, but she is a delight, and her “Carmen” aria was great.

And then there is the town bully, Gaston, a L’il Abner-looking buffoon who is so in love with his muscles that he likes to kiss them. Travis Nagler is marvelously over the top, singing such humble songs as “Me” while he attempts to get Belle to agree to marry him.

Gaston’s second in command is the weasely LeFou. Tomas Eredia gives one of the better performances in the show, just so sleazy that you almost like him because he’s so darn cute.

Steve Isaacson is also credited with set design and the sets are attractive, with the town background a huge piece that moves to bring in the castle. While not exactly opulent, they work well.

The trio of Silly Girls (Deia Farley, Kathleen Hornbacker and Lucinda Otto) are all vying for the love of Gaston and add a lot of fun to the town scenes.

Tracy Traum is credited as props designer. If that includes the famous “rose” whose petals fall slowly as the Beast comes closer to losing the chance to become human again, kudos. It’s perfect.

While the music of Alan Menken is less tuneful than others of his Disney repertoire, there are a few songs that you do remember.

This is a show that should appeal to both children and adults, though perhaps it’s more complicated for the very young kids.
Posted by Bev Sykes at 5:43 PM

Labels: Beauty and the Beast, DMTC