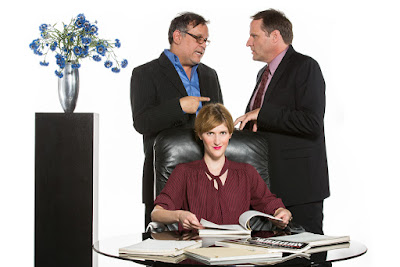 I waited patiently throughout David Mamet’s 80-minute one-act “Speed-the-Plow” now at the B Street Theatre in Sacramento, certain that the show itself would give me a clue as to what the title meant. But it didn’t.

After the show, a circle of critics also each admitted that they did not know what it meant either. Aren’t we lucky to be living in the age of Google?

“God speed the plough” comes from a 15th-century work song and was a prayer for prosperity and productivity.

Mamet himself explained that he saw a saying on an old plate — “ ‘Industry produces wealth, God speed the plow.’ This, I knew, was a play about work and about the end of the world, so ‘Speed-the-Plow’ was perfect because not only did it mean work, it meant having to plow under and start over again.”

Mamet took his interpretation to the world of corporate Hollywood, specifically Bobby Gould (Dave Pierini), who has just been made head of production for a major movie studio and a down-on-his-luck colleague Charlie Fox (Kurt Johnson). This satire about the movie business gives the audience a glimpse of how things really work in the art of the Hollywood deal.

Charlie has just had the offer of a lifetime. A big Hollywood star has read one of his scripts and wants to star in the movie. Charlie is there to get Bobby to green-light the project. The two men are positively orgasmic at the bright future they see before them, with this big-name star and this violent prison/action movie. It will be the surefire blockbuster of the season and Bobby’s slump will be over.
There’s just one hitch: The paperwork needs to be finalized by 10 a.m the next day and the head of the studio will be out of town until then. Not to worry, Bobby assures his friend. The deal is as good as done.

Into the meeting comes Bobby’s temporary secretary, Karen (Stephanie Altholz), tall (in those 4-inch spike heels) and impossibly thin, but well proportioned. The men make all sorts of sexist comments about her after she leaves. Charlie bets Bobby $500 that he cannot seduce Karen.

To set the stage, Charlie engages Karen in discussion about plays he is considering and especially one very thick book called “The Bridge or, Radiation and the Half-Life of Society,” which he has been asked to read as a “courtesy,” though the studio has no intention of making it.

In the next scene, Karen comes to Bobby’s house with the thick book liberally marked with dozens of Post-It notes and she raves about the book and how it changed her life. She tries to convince Bobby that Charlie’s play is garbage and that he should produce this play. During the course of the discussion, she becomes the seductress.

In the final scene, a subdued Bobby admits to Charlie that he has changed his mind about which play he is going to green-light. Charles’ reaction and surprising revelations about Karen round out the action and bring the play to its surprising conclusion.

Mamet is known for wordy plays, and for a three-person play that is dialog-driven to work, the actors must be top-notch and the dialog needs to snap, crackle and pop. In this superb production directed by Jerry Montoya, it does just that.

Pierini and Johnson are excellent as the good-old-boy Hollywood mogul types. Pierini is particularly notable for the change from Scene 2 to 3, where his demeanor becomes slow and steady, in opposition to his high spirits of the first two scenes.

Altholz is just great as the not-so-dumb office temp who shows she is capable of doing more than just pouring coffee for the men. Her subtle shift from naive, submissive temp to take-charge seductress is masterful.

This is a first-rate production for the B Street Theatre.
Posted by Bev Sykes at 8:47 AM

Labels: B Street, Speed the Plow