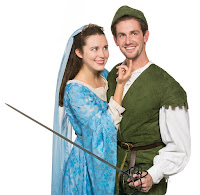 It was like walking into the real Sherwood forest to enter the small B Street Theatre. Not only was there a realistic forest on the stage, along with a quaint ivy-covered castle, but mylar leaves floated gently from the ceiling all over the theater. It was magical even before “Robin Hood” began.

The tales of Robin Hood have been with us since the 14th century, but they were oral tales, spoken or sung as ballads, played as games, or presented as plays to groups throughout the centuries. So we have no idea who originated the tales, or when they began.

In the 18th century, Joseph Ritson collected five centuries of stories and published them, putting them in some sequential order.

“The Tales of Robin Hood,” now part of B Street’s Family Series, was adapted by playwright Greg Banks from the 1956 book, “The Adventures of Robin Hood,” by British author Roger Lancelyn Green. “Robin Hood” received its world premiere at the Children’s Theatre Company in Minneapolis in its 2010-2011 season and subsequent productions in other children’s theaters around the country have been sell-out hits.

The B Street play covers five of Green’s stories, woven together into one 45-minute act, directed by Jerry Montoya. It is performed by five talented actors, each of whom plays more than one role, except Darek Riley, who is Robin throughout, and a handsome hero he is.

Fiona Robberson is a winsome Maid Marian (and also, early in the play, her father Much). No shrinking violet, this Marian is a worthy consort of Robin.

Stephanie Althoz is a member of the ensemble, and also plays Friar Tuck. This Friar is not the roly poly Disney-esque Tuck, but more an active member of the merry men.

Winston Koone is the man you love to hate as the Sheriff of Nottingham. He didn’t get booed, but he should have been!

Sean Patrick Nill does quadruple duty as Prince John, Will Scarlet, a soldier, and Little John. He’s probably the smallest “Little John” I’ve seen, though he is not by any stretch of the imagination “little.”

This show is captivating for children of all ages, and fun for the adults too. There is lots of action, with men swinging from trees, big bows and arrows, great sword fights and a little bit of interaction with the children in the audience, who beamed when chosen to shoot one of the invisible arrows from a bow.
Posted by Bev Sykes at 12:15 PM