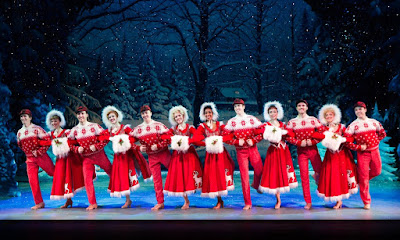 Comparisons are odious. But when there is a movie as beloved and iconic as “Irving Berlin’s White Christmas” and it has been adapted for the stage by David Ives and Paul Blake, comparisons are inevitable. It’s obviously impossible to duplicate the familiar Bing Crosby, Danny Kaye, Rosemary Clooney and Vera Ellen combination.

Now at the Community Center Theater, this Broadway Sacramento production is flashy, colorful and a lot of fun. It’s also nowhere near on a par with the movie, so if you don’t expect that, you won’t be disappointed.

The story is familiar: The famous song-and-dance team of Wallace (Sean Montgomery in the Bing Crosby role), and Davis (Jeremy Benton) meet the aspiring sister act of Betty Haynes (Kerry Conte in the Rosemary Clooney role), and Judy Haynes (Kelly Sheehan), and head to a ski resort that turns out to be run by Wallace and Davis’ old World War II commanding general (Conrad John Shuck, a familiar face from countless Broadway and television roles), who has fallen on hard times and is looking at a bleak ski season, as Vermont is experiencing unseasonable warm temperatures.

The story turns into “find a barn and put on a show to save the general,” and it all ends predictably with beautiful snow on stage and in the audience.

However, there are plot differences from the movie, new characters and character twists, and additional Irving Berlin songs not found in the movie, such as the show-stopping tap number, “I Love a Piano” (which film buffs will recognize from “Easter Parade,” not “White Christmas”) and “Blue Skies,” to name but two.

One problem with the transition to the stage is that with the addition of songs, there is no time to develop characters or deepen relationships, so, for example, the “loathe him — love him” relationship between Betty and Bob requires a lot of suspension of disbelief.

My biggest disappointment, however, is that the finale of the movie, with Gen. Waverly being honored by his old platoon, packs a huge emotional wallop that cannot be achieved on stage without doubling the size of the cast. This production tries, and it kinda, sorta works, but it lacks a lot.

As for the performers, Montgomery is a pleasant Bob, but with a sharp edge to his voice that makes me long for a real crooner in the role. Benton, however, is a perfect Phil and pairs nicely with Sheehan as Judy, especially in the dance numbers.

Conte, whose bio says she has been playing Betty for 11 years, has certainly perfected the role by now. She’s a great chanteuse who gets a chance to display her vocal chops especially in the torch song “Love, You Didn’t Do Right By Me.”

The role of Martha Watson, the crusty but lovable dame who runs the general’s inn, is played by Lorna Luft. Martha was at one time known as “Motormouth Martha” in her old performing days. Luft belts out her songs and does credit to mama Judy Garland, especially with her “Let Me Sing and I’m Happy.”

The general’s granddaughter is played by twins Clancy and Samantha Penny. Clancy played opening night and was an audience favorite at the curtain call.

Making the most of a the tiny role of Ezekiel, the laconic stage hand, Frank Ridley was perfect.

The set design by Anna Louizos was spectacular with several very large set pieces to bring on or off throughout the show, though the pieces were so heavy it was impossible to keep the rumbling of the set change quiet during the filler scenes in front of the curtain.

Carrie Robbins’ costume designs were lush and wonderful, and worth the price of admission by themselves.

This is an enjoyable show that is a great break after all the busyness of the holidays.