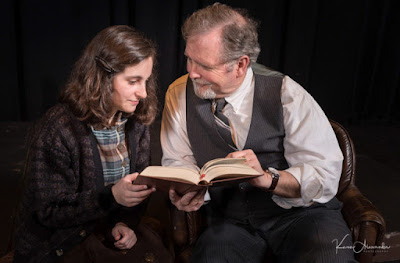 It is ironic that the Woodland Opera House is presenting “The Diary of Anne Frank” at a time when our government is rounding up illegal immigrants and putting them in detention centers and there is such controversy over refugees seeking asylum in this country.

Frank’s family tried to escape the Nazis by coming to the United States, but that opportunity was blocked by the government, fearful of allowing Nazi spies into the country,

We know, of course, that Anne died of typhus at the Bergen-Belsen concentration camp. Her dream had been to become a famous writer, and her diary has been translated into more than 60 languages and is perhaps one of the most famous books in the world.

The current production, by Frances Goodrich and Albert Hackett, newly adapted by Wendy Kesselman and directed by Dean Shellenberger, is a beautiful tribute to Anne Frank and to her family and their years hiding from the Nazis in the secret annex above Otto Frank’s office.

Rachel Trauner (Anne) has been part of the Opera House’s “Broadway Bound” program for several years, though she has appeared in only two musicals before, says her mother, who sat in front of us for this show.

Taking on such a huge role must have been daunting, but she brought Anne to life beautifully, the spirited 13-year-old who grows into a thoughtful teenager during her two years of concealment. She is mischievous, serious and thoughtful, and the real spark — and sometimes bane —of the family.
Set designer Don Zastoupil has created the claustrophobic world where eight desperate Jews hid for two years, keeping silent during the day and daring to “live” at night. Watching the eight practically climb over each other, with never any “alone time,” one gets a sense of what it must have been like as the group dealt with hope and fear at the same time, sometimes allowing themselves to laugh, often grieving the life they left behind.

Jessica Hanselman plays Miep Gies, an employee of Otto Frank, who was one of the handful of citizens whose assistance was vital to keeping the group alive. Hanselman gives Gies a gentle, sensitive portrayal though occasionally her projection lacked oomph.

Colin Coate plays Mr. Kraier, who assists Gies in bringing food and news to the extended family.
Otto Frank is played by Steve Mackay, the guiding hand and often calming influence on the others. Otto was the only survivor of the group, and the one responsible for bringing Anne’s diary, saved by Gies after their ultimate capture, to the world.

Analise Langford-Clark is his wife, normally another steadying influence but occasionally the pressure gets to her, too.

Gil and Lenore Sebastian play Mr. and Mrs. VanDaan, trying to hang on to their upper-crust lifestyle, while Mr. VanDaan deals with insatiable hunger and Mrs. VanDaan can’t bear to give up her fur coat, the last remnant of her former life, even if it means more food.

As Anne’s sister, Margot, Sammy Caiola is the epitome of a nerdy teenager who is slowly disappearing into her self as the conditions of their self-imposed incarceration become more overwhelming.

Mr. Dussel (Paul Fern) is a late addition to the group, a grumpy dentist who is the most troublesome, as he complains about everything and causes more conflict than perhaps anyone else, with the possible exception of Mr. VanDaan.

Hayden Taillon has the small role of Peter VanDaan, whose role in Anne’s diary was much larger, but Taillon plays the young man as a friend of Anne and a referee of his parents’ many quarrels.

Through Anne’s diary, this band of people have come to represent the millions who either survived or died during the Holocaust. In spite of it all, Anne never lost her optimism and perhaps her famous quote — “… in spite of everything, I still believe that people are really good at heart” — is something we desperately need to keep in mind these days.