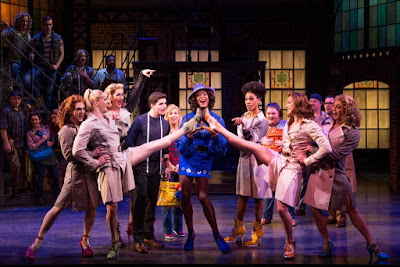 What do you get when you mix singer/songwriter Cyndi Lauper with actor/playwright Harvey Fierstein? You get glitz and glam and a fabulous production, with a pair of shoes at the center of it.

The long-awaited “Kinky Boots” is now causing toes to tap at the Community Center Theater in Sacramento. It is a non-stop singing, dancing extravaganza with more sequins than may have graced the Community Center stage in years. The colors! The lights! The music! All pour out over the audience, which caught them with whoops and cheers.

The story (yes, there is one) is actually based on the true story of a five-generation family factory (W.J. Brooks) in Northampton, England. The whole town made shoes, but because of cheap imports that flooded the market in the 1980s and ’90s, many companies were going out of business and Brooks was forced to cut his staff by more than half.

Just as all seemed bleak, the current head of the factory received a call that would change his life. A fetish store in Folkstone commissioned him to create ladies’ shoes for men. Soon, Divine Footwear was born, a subsidiary of W.J. Brooks dedicated to making “kinky boots.” By 1999, the specialty shoes made up 50 percent of the company’s revenue.

(A sad P.S. to the story was that an American company dumped a big debt on Divine Footwear and they were forced to stop production.)

But proving that there is a silver lining to dark clouds, out of that story came an indie movie (non-musical) and now this amazing musical production showcasing the music of Lauper, her first-ever Broadway show, which won her a Tony for Best Musical and Best Original Score, as well as countless other awards.

“Kinky Boots,” however, is more than just the story of rescuing a factory and creating fabulous shoes. It’s about a guy who thought outside the box and took a chance on doing things a little differently. It’s about how unlikely people overcame their differences.

Curt Hansen is Charlie Price, who really isn’t into shoes and who wants to break with tradition and go to London with his social-climbing girlfriend Nicola (Katerina Papacostas). But life changes for him when his father (Tom Souhrada) dies suddenly and Charlie must decide what to do with the factory, and its employees, who have been his lifelong friends.

J. Harrison-Ghee, as Lola, is a force of nature as he bursts though a shimmering curtain and joins the rest of the dancers at a seedy London club where he first meets Charlie. He inhabits the drag-queen role with every ounce of energy he has, and an assortment of gorgeous wigs and costumes. Seeing him on stage is worth the price of admission alone.

In the Fierstein-Lauper version of the story, both men are victims of failed parental expectations, which brings them a bond of understanding, beautifully highlighted in one of the show’s most moving songs, “Not My Father’s Son.”

Each man has his own signature song that comes from the depth of his pain. For Charlie it is “Soul of a Man” berating himself for not being as passionate as his father, and for Lola it is “Hold Me In Your Heart” an accept-me-for-who-I-am statement in the manner of “I Am Who I Am” from “La Cage aux Folles.”

Surrounding these two men are a host of talented actors, including Aaron Walpole as Don, the factory worker who, after a rocky start, learns to accept Lola for who she is.

Rose Hemingway plays Lauren, the girl who has a secret crush on Charlie and who is his biggest supporter when things go wrong. Her “The History of Wrong Guys” was gut-wrenching, and perhaps more lyrical than any other song in the show.

All’s well that ends well and Lola’s “angels,” a sextet of drag queens, save the day in the rousing finale, “Raise You Up”/”Just Be.”

After all, there’s no business like shoe business.
Posted by Bev Sykes at 4:09 AM