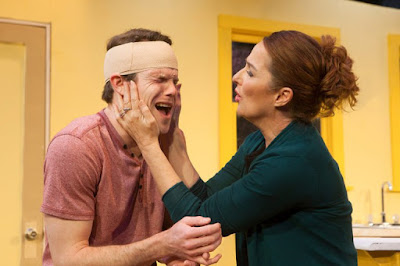 If Conrad loves Nina and Nina loves Trigorin and Trigorin loves Emma while Dev loves Masha, who loves Conrad — we can only be in a Russian tragedy.

“Stupid F##king Bird,” currently at Capital Stage, under the direction of Michael Stevenson, is a hilarious yet reverential homage to Anton Chekhov’s “The Seagull.”

The title came about as a joke, playwright Aaron Posner explained. “I was saying how much I loved ‘The Seagull’ and how much I kind of hated it. As I left the room, I literally said, ‘I should do my own adaptation. I should call it Stupid F##king Bird.’ ” And so he did.

This is more or less the plot of “The Seagull” with the themes more or less the themes of Chekhov’s and, like the original, it is all about theater, including a play within a play in which the audience is invited to contribute ideas. But the lines between reality and stage are blurred and the characters often are not aware that they are actors in a play.

Yes, it’s a little confusing, but stick with it. It’s very funny and all comes together. Sort of. By the final bow.

The marvelous Ian Hopps is Conrad, the tortured playwright desperate to get his play appreciated, especially by his mother, Emma (Rebecca Dines), to whom the play is directed.

Hopps made a big impression in Davis Shakespeare Ensemble’s “Bells are Ringing” last summer and does not disappoint in this production, filled with passion, self-deprecation and anguish about his unrequited love for aspiring actress Nina.

Brittni Barger as Nina is a hopeless romantic who longs for a stage career (but isn’t really talented). She is dazzled by the philandering literary legend Trigorin and believes he is her key to fame and fortune.

Dines plays the successful actress and family matriarch Emma, who has had a love/hate relationship with her son for all of his life, which explains a lot about Conrad.

Capital Stage favorite Jason Kuykendall is Trigorin, tall and cool, but easily swayed by the sexual advances of both Nina and Emma. (Warning to the audience: There is a bit of nudity in this show, as well as liberal use of the F-word.)

Comic relief is provided by Jouni Kirjola as Dev, with a smile that comes right out of a cartoon. His smile often hides a breaking heart but he is Con’s BFF and an essential part of his life. Kirjola offers the perfect blend of social awkwardness and charm.

A real find is Wenona Truong, as Mash. The actress comes out of the Capital Stage Apprentice Program and is perfect as the deadpan, perpetually depressed Mash, strumming her ukulele and singing bitter songs to express her unhappiness.

Peter Mohrmann is Dr. Sorn, Emma’s brother, whose role seems to be that of a detached observer, though he secretly has his own feelings of longing, if nobody on whom to focus them. He self-medicates with vodka. He is dying, but nobody knows it. This is the kind of role in which Mohrmann excels and he gives an expected strong performance.

Scenic design is by Timothy McNamara. The set is so impressive it is worth sitting through the intermission to see it changed.

Likewise, Glenn Fox does a good job of lighting, switching from theatrical performance to “reality” by means of lighting changes.

It is Con who tells this story and even as it achieves some success, he’s not happy.

“You know what f-ing sucks about a little success? It just feels like a set up for a new kind of failure — a more painful kind. Because now instead of just my family, I’ll get to have, you know … perfect strangers judging and pitying me, too.”

If the audience is any indication, there’s not a lot of negative judgment in this production. In fact it’s pretty f-ing brilliant.
Posted by Bev Sykes at 6:44 PM