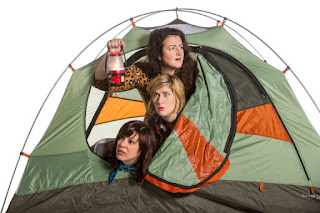 What happens when you put three of Sacramento’s funniest ladies together and tell them to write a play? You get a lot of funny stuff!

“Buck (Busfield) got us all together and said ‘You’re all funny, despite horrible things that happened to you. I want you to write a play about how funny came out of it,’ ” Altholz said.

A year later, the play is on the stage under direction of David Perini.

Though apparently the life experiences the women have suffered were the inspiration for the play, one would be hard-pressed to figure out who has experienced what. This is a play about other women and can easily be performed by any set of wonderful comediennes.

To write the play, the women decided to go camping so they would have a good atmosphere for brainstorming. Not only did they get ideas, but they decided that this would be the perfect venue in which to set their story. In fact, Sissom took notes on their discussion and those notes became the frame on which they hung the rest of their story.

The setting is a campsite on the one-year anniversary of the death of Jayne’s mother. Jayne (Sissom) has had difficulty saying goodbye and letting go, but she is finally ready to spread Mom’s ashes and has brought her best, lifelong friends, Roxanne (Altholz) and Patricia (Kelly), with her for emotional support.

Roxanne must really love her friend because she is germ- and dirt-phobic, knows nothing about camping and hates what she knows. She looks like she would be more comfortable chairing the local PTA meeting. But she has shown up to support Jayne.

Patricia, on the other hand, loves being there but has brought as much comfort with her as possible, including a slow cooker. Kelly is a remarkable physical comedienne with a wide range of facial expressions that serve her well, expressing everything from glee to depression and just about everything in between.

Jayne wants to commune with nature and has not thought to bring things like tents or sleeping bags or anything else to make it easier to live in the wild overnight. She is centered on giving Mom the best possible send-off.

There is a lot of very funny physical comedy (particularly involving bears), which kept the audience laughing. But as the day passes and the women cope with the various problems that come up, and pass around a large bottle of Jim Beam, walls begin to fall.

Though these are lifelong friends, they discover there are very serious things that they don’t know about each other. Their friendship will be tested, but in the end it is their long-term association with and love for each other that will not only keep them together, but make the bonds stronger.

Oh yeah — and you’ll laugh a lot during the exploration.