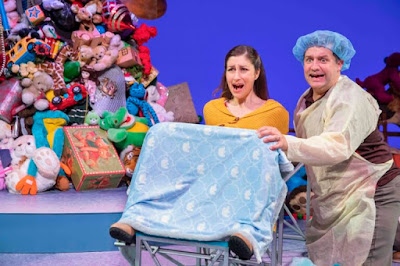 I enjoy comedy, but I’m a tough critic. It takes a lot to make me laugh out loud. With that said, you should know that I laughed out loud throughout the entire first act of the new B Street production, “The Forever Question” by James Christy, directed by Lyndsay Burch.

The play, which won last year’s New Comedies Festival (a pool of 70 plays hoping to be chosen for a mainstage production this year), is about a couple trying to decide whether or not to have a second child.

Playwright Christy says the idea for this play came after he and his wife had their third child and he started to wonder, “How did I even get here?” Writing “The Forever Question” was his way of examining how becoming a parent changes your life forever — and why, having done it once, we ever do it again.

Actors Peter Story and Dana Brooke are stunning, playing the young couple, Mike and Carolyn, and, throughout the play, several other minor characters including her mother, his father, and his brother. They are so effective because all it takes is a small prop (like a beer bottle or a scarf) and a slight change of facial features to pop in and out of character.

This would be funny for anyone, but anyone who has a child — or more than one child — will especially enjoy it and find themselves remembering their early days of parenthood.

Through flashbacks, the couple remembers their first dating experiences and first sexual encounters. Back in today’s time, they make very, very funny observations about parents, babies, sex, childbirth and relationships between men and women.

Mike’s memories of his first sexual experience had the audience in stitches, and his attempts to prove to Carolyn that he understands menstrual cycles only get funnier and funnier.

Carolyn gives birth to their first child on stage — and you have to wonder how they did that as that basketball sized pregnant belly turns into a blanket-wrapped baby when it’s all over.

By intermission, everyone was laughing so hard that as the audience filed out to the lobby for a few minutes, even the usher was still laughing and sharing his own parenting experiences with people in his section of the theater.

I wish I could say that the second act was as good as the first. It was also very funny, but including the death of Mike’s father, the children growing into rebellious teenagers and both Mike and Carolyn facing the prospect of growing older, the laughs were further apart and not as hilarious. They were still tweaking the script on opening night, artistic director Buck Busfield explained, and I would love to return later in the run to see how it changes as it grows.

The scenic design by Samantha Reno is amazing. B Street asked for donations of toys to help decorate the stage and they received so many that Reno has built marvelous mountains of toys that rise up from the floor and hang down from the ceiling. The toys will be donated to children’s groups at the end of the run.
Posted by Bev Sykes at 3:42 PM

Labels: B Street, The Forever Question