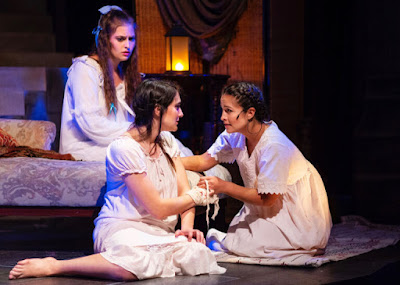 Set in 18th century Mexico during the Spanish Inquisition, three young women are admitted to a convent for their protection. Jesusa (Gabby Battista) is a “Mestiza,” a woman in danger because she is of mixed race. She has been living in a Carmelite convent, but is sent to help Sor Rufina (Susanna Florence) take care of Sister Isabel (Kelley Ogden), who is going blind.

Tomasita (Leah Sanginiti), a servant, is brought by her mother to be a slave for the nuns, who will protect her from the Inquisition.

Manuela (Talia Friedenberg) is a noblewoman with her own secret who is also seeking protection for reasons that will become obvious far too soon.

The nuns, particularly Sor Filomena (Laurie Strawn), are none too happy with the new residents and, with room scarce, put them in a basement, where they are told they can sleep but not to touch a large locked cabinet. Naturally, they do and in it they find the writings of Sor Juana Ines de la Cruz, a famous protofeminist and intellectual who died 20 years before.

The convent was once a center of culture, and Sor Juana was one of the first advocates for women to have the right to an education and her library was one of the largest in the New World. But under the pressure of the Inquisition, Juana was forced to take a vow of silence and burn her books. She died aiding her sisters during the plague.

The women aren’t sure what to do about their find. At first, they are afraid to even touch the writings because it is forbidden for women to be educated (and only one of them can read well). But they eventually revel in the contents of the papers and even begin singing Sor Juana’s songs (to the accompaniment of a guitar hidden in the cabinet) and performing plays, an act which creates a bond of sisterhood among the three.

In a funny scene, the young women are trying on men’s clothes, costumes for one of Juana’s plays. It is such an unimaginable thing for women to wear men’s pants that they all feel very naughty.

By the end of Act 1, I was thinking this was a pleasant play and watching the growing friendship among the women was nice — but I wasn’t sure where it was going or what the point of it all was. The longer Act 2 answered all my questions.

The all-female ensemble was fantastic, each player highlighting the quirks of her character superbly. Battista lit up the stage with her effervescent Jesusa. (She is so chatty, it’s difficult to imagine her in the silent monastery!)

Ogden was a joy to watch as Sor Isabelle, who, unlike her fellow sisters who are terrified of the Inquisition, is clinging onto her last glimpses of music and art left by her beloved Juana.

Lisa Quoresimo plays a powerful and frightening Mother Superior (sadly a vision that many still have of women in her position). She is at her worst at the climax, which is a beautiful scene but a cruel decision on her part, which she truly believes would protect the sisters.

The many scene changes are hardly noticed because of the lovely quartet singing Gregorian chant: Margie Curler, Lisas Halko, Monica Vejar and a fourth nun (split between Strawn and Quoresimo). They are a highlight of the production.

This play resonates on many levels and makes us wonder what life would be like if we were deprived of everything that makes life worth living.