Members of local and regional community theater were honored at the 37th annual Elly Awards, sponsored by the Sacramento Area Regional Theatre Alliance (SARTA), Sacramento’s answer to Broadway’s Tonys. Because of the number of awards, there were two ceremonies: the Youth Awards on Sept. 8 at Cosumnes Oaks High School Performing Arts Center in Elk Grove and the Adult Awards on Sept. 22 at The Center in Sacramento.

Nominated for 42 awards, the Woodland Opera House picked up 10, including two Adult Awards.
Lenore Sebastian received the award for best Supporting Female in the Musicals category, for her role as Maggie Jones in Woodland’s highly acclaimed “42nd Street.” 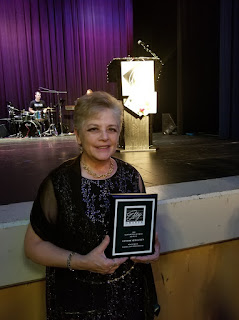 “It was pretty shocking,” Sebastian said. “I seriously had no expectations. The last Elly I won was for “Candide” in 1990!” She added, “I was thrilled for Opera House because sometimes the Ellys seem to ignore Yolo County. Half of the people I talked with at the ceremony had no idea the Woodland Opera House even existed.”

Choreographer Staci Arriaga also received an award for her work in that show. Arriaga had also been nominated for her choreography in the Children’s Theatre Production of “Annabelle Broom.”

Glica-Hernandez said, “As satisfied as we are at Woodland Opera House to be recognized with SARTA’S Elly Awards, our cast, designers and directors were delighted to work on the original script for ‘Rumpelstiltskin, the Game of the Name.’ Creating a world premiere is an unforgettable experience for all of us. Playwright Catherine Hurd and composer Vatrena King gave us a marvelous piece upon which we could build.”

“Annabelle Broom, the Unhappy Witch” received two awards, one to Veronica Gersalia for Makeup Design and one to Denise Miles for Costume Design.

Joey Vincent picked up an award for Set Design for “The Cat in the Hat.” 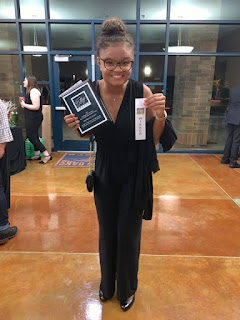 “I never thought I’d actually win an Elly!” she exclaimed. “Ursula was such a horrifically fun role!”

Amaralyn actually had a mega dose of “The Little Mermaid.” When her father, cast as Sebastian in the main stage version of the show, suffered an injury, she stepped in and after only three rehearsals did that role for 12 performances, before starting the Young Performers’ Theatre version of it as Ursula.

Named for Eleanor McClatchy, a devoted patron of the arts, the Elly Awards celebrates excellence in Sacramento regional theater.

SARTA’s mission is to promote high-quality theater in the Sacramento area and neighboring regions. When combined with the opportunity to provide quality entertainment and formal recognition of those in the performing arts, SARTA and the Sacramento community benefit.