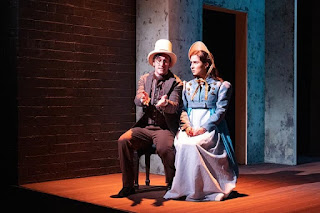 There are many reasons to see Sacramento Theatre Company’s world premiere production of “Jane Austen’s Northanger Abbey,” adapted by local playwright, Carissa Meagher, but foremost among them is Olivia Stevenson, an alum of STC’s Young Professionals Conservatory, who plays both Austen herself and Catherine Morland, the heroine of the novel.

Stevenson has the herculean task of being on stage almost the entire show and she is magnificent.
“Northanger Abbey” was Jane Austen’s very first novel, but it was not published until it was discovered by her brother after her death. It was Austen’s satirical contribution to the gothic novels of the time, which she so enjoyed.

It was that satire that appealed to playwright Meagher. “I found myself absorbed in the budding romance of the book’s protagonist, Catherine Morland and her new suitor Henry Tilney, while also curious about the darkness to be found at Northanger Abbey — only to find myself suddenly cracking up at Austen’s commentary on it all.

STC decided that its 75th anniversary was the perfect time to introduce this 20-something playwright’s work to the world. And what a delight it is.

Feeling that the story needed a narrator, Meagher introduced Austen herself, along with her brother Henry (Corydon Melgoza). The story begins with the pair discovering Jane’s forgotten novel. They begin to read from the book and tell the story of the unlikely heroine who goes from a wild and free-spirited kid, who much prefers rolling down hills and playing cricket to learning the piano, to an intelligent young lady, ready for a life in society.

Catherine is invited by her neighbors, the Allens (Marie Bain and Michael Jenkinson, who also play Catherine’s parents at the start of the show) to come with them to Bath so that she can be part of the social season. Uncomfortable and shy, Jane makes friends with Isabella (Rebecca Mason, in an engaging performance) whose brother John (Mike DiSalvo) finds her appealing, though she is put off by his boorish attitude and has no interest in him. She is, however, interested in the dashing Henry Tilney (James Edwards) and becomes friends with his beautiful sister, Eleanor (Devin Wiesner).
Henry’s father, the stern, tyrannical General Tilney, is played by Capital Stage co-founder Jonathan Rhys Williams, who has not been on the STC stage since 2008. In those days he played the handsome young suitor roles, but he has grown into middle age roles elegantly.

Invited to Henry’s home, Northanger Abbey, Catherine’s gothic suspicions kick in and she becomes convinced that Henry’s mother was killed by his father and she searches the house trying to find clues. When the general discovers that Catherine is not rich, he denies Henry’s desire to propose to her, until the truth of her history is revealed.

Jarrod Bodensteiner has done a wonderful job of creating a gothic-looking castle using only a few doors, moved easily from place to place. It’s how to make a set without actually making a set — and it works

Isaiah Leeper’s lighting design is also integral to the story, going from present to past to gothic.
Teresa Stirling-Forsyth and Michael Jenkinson have directed a tight production that is certain to please any Austen lover, and a few new to the author themselves.

Sacramento Theatre Company’s 75th season is off to a good start.
Posted by Bev Sykes at 11:01 AM