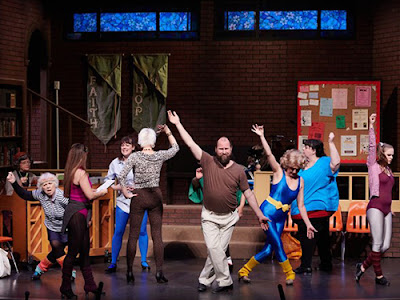 The Woodland Opera House, which now has its own dance program, has shown off its dancing skills in several recent shows and now it has decided to feature them.

“Stepping Out,” by Richard Harris, takes place in a church basement, with a group of women and one man learning how to tapdance. The class has been invited to take part in a big charity show and they must learn a choreographed routine or be made a laughing stock.

Sadly, it was very difficult to hear most of the dialogue. I thought it might be that I was sitting in the back row (though that should not have been a problem), but when I checked with friends sitting in row five, they said the same thing and overheard people at intermission talking about the show being unintelligible: “I had an acute feeling of being cheated when it seemed as if half the audience could hear and respond to the dialogue, while the rest of us had no idea what was so funny. Such a loss.”
However, intelligible or not, this is a fun play and the finale is well worth it.

Harris was encouraged to write “Stepping Out” after his wife returned from a dance class and pitched the idea as a possible play.

He went to his local village hall and saw a bunch of misfits attempting to make sense of a tap class — and “Stepping Out” was born. The play was a hit in London and a musical version, based on the play, was made in 1991, starring Liza Minnelli and Shelley Winters. The Woodland production is not the musical.

Director Bob Cooner has chosen a wonderful assortment of types for his cast, and they are a perfect look for the group of “misfits” Harris was attempting to describe.

Instructor Mavis (played by Jenny Plasse), a down-on-her-luck former professional dancer, has her hands full managing the range of personalities and skill levels of her motley crew while at the same time dealing with her gruff, outspoken accompanist Mrs. Fraser (played by Nancy Agee). Mavis is doing her best to remain upbeat despite the lifestyle change and unexpected shock news.

The dancers reveal their strengths and insecurities as they step out of their comfort zones to make meaningful connections with each other, but we don’t really learn a lot about any of the characters, just the briefest bits of information that make one long to know more about their backstory.

Andy (Analise Langford-Clark), for example, insists on a long-sleeved leotard and always clutches something to her body when not dancing. We never hear definite evidence of an abusive husband, but it seems clear that she is hiding bruises.

It would be nice to know more about the quiet nurse Lynne (Nicolina Akraboff) who says she comes to class because it’s the only thing she does for herself. She obviously cares a lot about her job, since the death of one of her patients is so upsetting for her.

Also having difficulty with grief is Geoffrey (Darryl Strohl-DeHerrera), the only man in the group, who is trying to deal with his wife’s death and is uncomfortably embarrassed at the thought of appearing in public.

Charlotte French is Dorothy, the most awkward and uncoordinated of the group (other than Geoffrey) but desperately trying to learn the steps. It’s a great role for French, who is actually quite a good dancer (you have to be a fine dancer to make your dancing look so bad). In the role of the older woman in the group, she is very funny.

Deborah Hammond is a joy to watch as Rose, very positive and full of fun, and Ania Mieszkowska is Maxine, whose size is never an excuse to give less than her best and who can dance as well as the rest of them.

As the play begins, it is Sylvia (Emily Delk) who is the most proficient. She stands model-thin and tall and knows all the steps the others are struggling with. She chews gum constantly and puts chewed gum everywhere.

This is a huge deal for Vera (Patricia Glass), a neatnik who is forever picking up the gum and also cleaning the bathroom during tap drills. Vera, who may match Sylvia in talent, has the most amazing costumes (credit to costumer Denise Miles!).

By the end, of course, the group have all learned how to tap dance and perform two outstanding numbers, which makes this show, whether you can understand what is being said throughout or not, definitely spec-tap-ular.