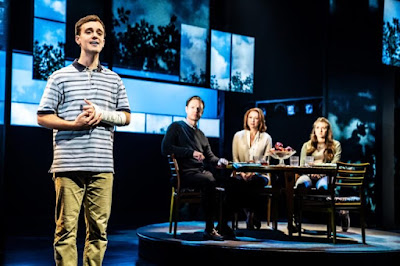 “Dear Evan Hansen,” the current Broadway on Tour production, is perhaps the most visually exciting show you will see this year. The set is a cacophony of social media: big screens, little screens, vertical screens, horizontal screens, which practically fill the stage, slide in and out and up and down and play various things from text messages and tweets to Facebook entries, to photos and videos and even a penguin or two. It’s tour de force for scenic designer David Korins, projection designer Peter Nigrini and the crew that make it all work.

But the set is only the beginning of this 2017 Tony award winner for Best Musical, which is perhaps a testament to where theater may be going in the 21st century.

Evan Hansen (Stephen Christopher Anthony) is an isolated teenager longing to fit in. His arm is in a cast from, he explains, falling out of a tree on a summer job he was working, an incident which becomes more significant as the story progresses.

He is about to start a new school, is on medication and is regularly seeing a therapist, who suggests he write himself a letter every morning to talk about positive things that he expects to happen that day. His single mother Heidi (Jessica E. Sherman) cheerfully sends him off to school, with a suggestion that he have students sign his cast.

Things don’t go well, however, and the only student with whom he has an encounter is a guy named Conner (Noah Kieserman), who signs the cast with huge letters, and gets angry with Evan when he learns of the boy’s attraction to his sister. Three days later, Conner takes his own life, leaving his family bereft.

Anthony’s performance is astounding. He carries the show and has a couple of solos that are very moving, especially “You Will Be Found,” a message to every alienated person, and “Words Fail,” the ultimate apology song.

Connor’s family, father Larry (John Hemphill), mother Cynthia (Colleen Sexton) and daughter Zoe (Stephanie La Rochelle) are the perfect grieving family. Cynthia is distraught and missing her beloved child, Larry is confused and angry at his son and doesn’t know how to express his grief, Zoe is furious and won’t even talk about him. She calls him a monster. The lie Evan will eventually tell them ultimately brings the three of them together as a family.

Unsure what to say to a grieving family, Evan hints that he and Connor were friends and that simple lie, as lies often do, grows and grows until it encompasses not only the family and the school but ultimately the whole country, as Evan is asked to speak about Connor at a memorial service and his nervous speech (“You Will Be Found”) goes viral on the internet and results in a GoFundMe site to raise money to reopen an apple orchard in Connor’s memory.

Helping perpetuate his lie are Evan’s cousin Jared (Alessandro Costantini), who provides humor to the story, and a friend Alana (Ciara Alyse Harris), who becomes the zealous co-president of the Connor Murphy Project.

As the lie begins to unravel, everyone is affected, particularly Connor’s mother Heidi, who, realizing how miserable her son has been, has a particularly moving and show-stopping solo with “So Big/So Small.”

Loneliness, bullying and suicide may not seem like ingredients for a hit Broadway musical, but Dear Evan Hansen has struck a chord, especially with younger people.