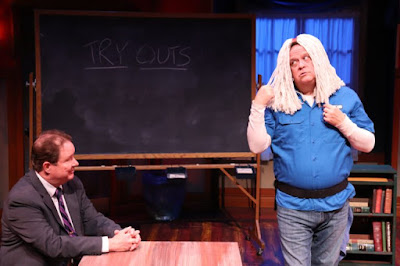 “Popcorn Falls,” the comedy currently at B Street Theatre, directed by Lyndsay Burch, is advertised to be “a side-splitting tour de force exploding with humor and heart!”

A small town in Michigan was playwright James Hindman’s inspiration for the show. The town was on the verge of bankruptcy until a theater opened. People responded and a couple of years later, the town had two theaters, a hotel and a restaurant jammed with people and the town was saved.

Popcorn Falls is a fictitious town whose tourist attraction is its namesake falls. When a corrupt politician turns off the falls to make it a sewage treatment facility, Mayor Trundle (Greg Alexander) discovers that the town will receive a sizeable sum of money if they can put on a play in a week. There’s only one problem — there is no theater, no play and no actors.

No problem, says Trundle, as he meets other members of the town to get a play produced, proving (as the synopsis in the opening monologue suggests) that “art can save the world.”

Alexander and Dave Pierini, two of B Street’s most popular actors, play more than 20 characters in this comedy, among them, Joe, a janitor; Becky, a bartender; Ms. Parker, the cat-loving town librarian; Floyd, the one-armed owner of the lumber yard; Mrs. Stepp, the chain-smoking middle school teacher and town vamp; and a bored teenager.

Unlike “Greater Tuna,” to which this comedy is often compared, there are no real “costume changes,” and each appearance of a character lasts only a few seconds. Pierini plays most of the characters by changing headgear, minor costume details, body language and accent in an eyeblink, while Alexander is the “straight man,” mostly the mayor and, briefly, one or two other characters.

The speed with which characters appear and disappear is both very funny, but also occasionally confusing since appearances occur so fast it’s sometimes difficult to keep the characters straight, though in the “plot” it hardly matters.

Nevertheless, it’s an amazing achievement, particularly for Pierini, and keeps the audience laughing throughout the 90-minute, one-act performance.

There’s even a kind of surprise ending, but I won’t give it away.
Posted by Bev Sykes at 10:09 AM