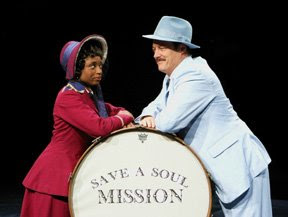 Fifteen years have passed since 'Guys and Dolls' appeared on the Music Circus stage.

After seeing director Marcia Milgrom Dodge's sparkling new production, it's hard to understand why the show stayed away so long.

This musical by Jo Swerling and Abe Burrows - based on short stories by Damon Runyon, with music and lyrics by Frank Loesser - is set on the streets of New York in the 1950s, and the characters are so stereotypically delicious that we can't help falling in love with them.

These are the low-lifes, gamblers, showgirls and gangsters, and the Salvation Army-like missionaries who try to save their souls. And Dodge secured an all star cast to portray them.

Tony Award-winner Gary Beach ('The Producers') is two-bit shyster Nathan Detroit, who runs 'the oldest established floating crap game in New York.' Don't look for the image of a young Sinatra, who played the role in the 1955 film adaptation; Beach's Detroit has been in business a long time, and is a wise-cracking, take-charge guy.

Detroit has been engaged for 14 years (!) to the long-suffering Miss Adelaide (Heather Lee), a singer and dancer at The Hot Box; she's beginning to worry that they'll never get married. Lee, who played this role in the show's Broadway revival, is a gem: a bleached blonde with a Betty Rubble giggle, who dreams of settling down in a real home with Nathan.

Their duet, 'Sue Me,' is a true crowd-pleaser.

Matthew Ashford - known to daytime soap opera fans as Jack Devereaux, from 'Days of our Lives' - is the high-rolling Sky Masterson. He's in town to pick up a few bucks at the crap game, but he picks up more than he bargained for; He falls in love with a straight-laced missionary, Sarah Brown (Montego Glover), when Nathan bets that Sky can't get her to go on an overnight trip to Havana with him.

Sarah, joined by her grandfather and others in their small band of missionaries, attempts (unsuccessfully) to bring God to the people of lower Manhattan. She dreams of romance ('I'll Know') but realizes that Masterson isn't 'it.'

Glover, last seen at the Music Circus in the title role in 'Aida,' made her Broadway debut as Celie in 'The Color Purple.' She has both a beautiful voice and the ability to play physical comedy as well, as evidenced by her antics while 'under the influence' in Havana.

If Sarah's grandfather Arvide Abernathy looks familiar, it's because the role is played by Conrad John Schuck, best known for his long-running role as Sgt. Enright in TV's 'McMillan and Wife.' Schuck, boasting a lengthy Broadway and TV résumé, has a wonderful voice; he also shows Arvide's deep love for his granddaughter.

The cast also includes a wonderful assortment of gangsters who speak in that unique mix of courtly formality and tough-guy vernacular: guys such as Nicely-Nicely Johnson (E.E. Bell), who got his nickname by answering 'nicely, nicely' whenever asked how he was doing. Bell brings down the house with his rousing rendition of 'Sit Down, You're Rocking the Boat.'

Will Mann stands out in the small role of Harry the Horse, particularly in the 'Crapshooters Ballet,' danced by the male chorus in the underground location Detroit has found for his game.

P.L. Brown is also notable as Big Jule, who has traveled in from Chicago for the game. Big Jule is appropriately named, as he's large and menacing, and has a voice that could comfortably sing 'Asleep in the Deep.'

Local favorite Rodger Hoopman - founder/producer/artistic director of the 33-year-old Chautauqua Playhouse - has appeared in more than 25 Music Circus productions. He pops up here as Lt. Brannigan, charged with shutting down the crap game.

The right apparel is essential to any production of 'Guys and Dolls,' and Leon Wiebers is particularly successful at creating the male characters by their costumes alone: an assortment of padded shoulders and pin stripes that say 'gangsta' before anybody even opens his mouth.

Add Sky's over-the-top blue number, and the black suit for Big Jule, and it couldn't be more perfect.

'Guys and Dolls' is a delightful show, full of witty dialogue and lots of familiar tunes. This production is certain to satisfy just about everyone.
Posted by Bev Sykes at 2:32 PM