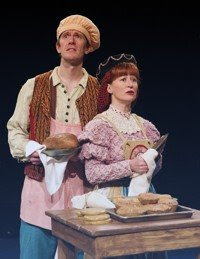 “And they lived happily ever after...”

Not necessarily. “Happily ever after” comes at the end of the first act for Stephen Sondheim & James Lapine’s “Into the Woods,” at Music Circus this week..

From the moment one enters the Wells Fargo Pavilion, one is in this magical world. Scenic Designer Evan A. Bartoletti has created what may be the most elaborate Music Circus set to date, a forest heavily laden with leafy branches, trees that stand tall, and then disappear out of sight, and a rocky forest floor which lends itself nicely to separating the “families” of this tale into their own space.

Sound Designer Robert Sereno fills the theater with the sounds of birds and other woodland creatures while the audience members are taking their seats so that by the time the lights go down, you are already in the mood and ready to jump into the story.

The story centers around the Baker (Jeffry Denman) and his wife (Vicki Lewis) and the curse put on the Baker’s father and all of his family years ago by the Witch (Yvette Cason), which has left the young couple childless. In order to break the spell, the Baker must gather four things – a cow as white as snow, a red cape, a golden shoe, and a lock of blonde hair.

One would be hard pressed to find a weak performance in this cast. They are each generally outstanding. Denman gives the character of the Baker an endearing quality and his “No More” is filled with pain.

Paladini, who played Little Red Riding Hood in the national tour, is perfect as the know-it-all moppet who is as matter of fact about swiping sweets from the Baker as she is about meeting Grandma (Karen Culliver) in the belly of the wolf (Jason Forbach).

The stage lights up whenever Cason steps on it. As the witch under a spell in the first act, she is menacing, and her on-stage transformation, hidden by pillars of smoke, into the glamorous witch is impressive.

The brother princes, Cinderella’s (Gordon Goodman) and Rapunzel’s (Jason Forbach) are deliciously over the top, self-centered, and very funny in their “Agony” duet.

There are not a lot of familiar tunes in this show, but it is filled with some beautiful moments, such as “No One is Alone,” sung by Cinderella, Little Red Riding Hood, the Baker and Jack when it seems that all is lost.

Likewise, the Witch’s “Stay with Me,” a plea to her daughter Rapunzel, is hauntingly lovely.

We sat next to a woman and her small child, who left the show at intermission. This surprised me, since I felt the show was so good, but on reflection I decided that this may be the perfect way to share this production with a small child. At the end of Act 1, it looks like every thing has turned out well for everyone and perhaps it’s best not to disillusion small children by staying for Act 2.

Act 2 is filled with betrayal, the death of beloved characters, sexual indiscretions, and the graphic sounds of the kinds of things that an angry giant on a rampage can do to puny human beings. The survivors do, in fact, ultimately look like they will have a happily ever after but the whole act might be a bit too disturbing for younger children.

This is the best Music Circus production thus far this season and is highly recommended.
Posted by Bev Sykes at 10:01 AM

Yeah, if I were taking a small one to this show (is this the "kid's show" this year?) I would leave at intermission. The second act is a bit scary.

Heck, if I saw the play the way I would really appreciate it, I'd leave at intermission--no matter how good the production. In my opinion, (I guess I'm an even bitterer hack) the concept of Act 2 is interesting but the actual unfolding of it is dull and not as sharply written as Act 1. I get a bit tired of the giant, among other items.