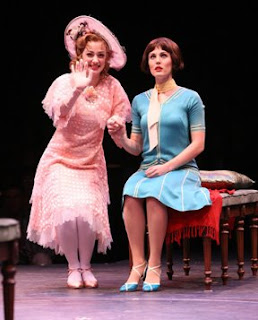 But the play knows this, and doesn't pretend to be anything but silly.

This sprightly show, making its Music Circus debut, transports the audience back to flapper-era New York and follows the adventures of Millie Dillmount (Mara Davi). The young woman arrives in the Big Apple fresh from Kansas, eager to shorten her skirts and bob her hair ... and get a job working for a millionaire whom she then car marry.

It's what the thoroughly modern 1920s woman does, she tells herself: marry for money, not love.

This old-fashioned musical has lots of great singing and dancing, terrific costumes and a little bit of plot to support it all. The book is by Richard Morris and Dick Scanlan, with a new score by Jeanine Tesori. Musically, there's something for everyone, with a bit of Sullivan minus Gilbert, a little Victor Herbert, a touch of Offenbach and some Al Jolson in Cantonese, complete with supertitles.

What more could you ask?

Actually, you'll also spot a subtle nod to W.S. Gilbert, in a scene that could have been inspired by an incident in 'The Mikado.'

That this production reached the stage at all is somewhat of a miracle. It became the obsession of Richard Scanlan, an actor/writer/director recovering from an illness at a friend's summer house, who had only one videotape for entertainment: 1967's somewhat mediocre Julie Andrews/Mary Tyler Moore film musical of 'Thoroughly Modern Millie.'

As Scanlon watched the movie over and over, he began to think he could turn it into a much better stage show. Sticking to his guns during the next several years, he finally got a meeting with the film's screenwriter, Richard Morris. The rest, as they say, is history.

The show opened at the La Jolla Playhouse in October 2000 and went on to Broadway during the first big season after 9/11. It became 2002's most honored new show, winning six Tony Awards, including best musical, best choreography, best orchestrations and best costume design.

Mara Davi, who stars in this Music Circus production, is a talented actress with a huge smile and a voice to match. She also dances up a storm.

On her first day, Millie meets Jimmy Smith (the delightful Matt Loehr), a ne'er-do-well who wins her heart, much against her plan to marry a rich man. Smith directs her to a hotel for young women, which is run by the irrepressible Mrs. Meers (Ruth Williamson) ... who runs a white slave racket on the side, shipping orphaned young women off to Hong Kong, to be sold into prostitution.

Mrs. Meers is an Oriental Cruella de Vil, and Williamson plays her to the hilt. (Interestingly, though, the directors have this faux-Chinese character speak with a stereotypical Japanese accent.) Mrs. Meers is assisted by Ching Ho (Billy Bustamante) and Bun Foo (Reggie de Leon), two immigrants who are trying to bring their mother over from China.

At the hotel, Millie forms a fast friendship with the lovely 'Miss Dorothy' (Megan McGinnis), an innocent sweet young thing who hides a secret.

Millie gets a job working for the very wealthy Mr. Trevor Graydon (Robert Townsend). One of the show's highlights is her job interview ('The Speed Test'), which borrows a patter song from Gilbert & Sullivan's 'Ruddygore,' with new lyrics by Scanlan.

Along the way, Millie falls in love with Jimmy; it's also love at first sight for Miss Dorothy and Trevor Graydon, who instantly break into Victor Herbert's 'Falling in Love with Someone' - from 'Naughty Marietta' - as they meet each other.

But all is not about to end happily ever after, because Mrs. Meers decides to kidnap Miss Dorothy. It's up to Millie, Jimmy and Mr. Graydon - with assistance from Muzzy Van Hossmere (the incomparable Karole Foreman), Manhattan's most celebrated chanteuse - to get her back.

The show includes enough narrative twists and identity mix-ups to satisfy a Gilbert & Sullivan audience, but the plot is irrelevant; the show really is about Jeanine Tesori and Dick Scanlan's music, John MacInnis' choreography and the talented cast's energetic performances.

Tuesday's opening night audience received a special treat: an appearance by stage and screen star Carol Channing, present to promote her upcoming 'Carol Channing and Friends' benefit at the Music Circus, which will raise money for the Foundation for the Arts and California Musical Theater.

Channing gave a heartfelt plea to restore funds for arts in the schools, and she sang a sweet little song that charmed the audience. (She then stayed to watch the show as well!)

Channing will be joined by Jo Anne Worley, Carol Cook and Joyce Aimee; the show will be presented one night only, on Aug. 31. Information and tickets are available at the Music Circus box office, (916) 557-1999.
Posted by Bev Sykes at 12:15 PM