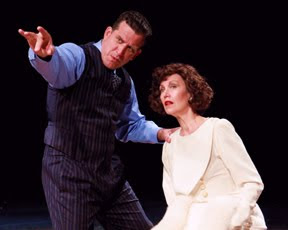 'Kid, you're going out there just a girl from the chorus, but you're coming back a star!'

Or words to that effect.

Shows such as '42nd Street,' continuing through Sunday at Sacramento's Music Circus, still encourage young kids to flock to Hollywood or Broadway, certain that they'll be the next one who steps from obscurity into the spotlight, to become an overnight sensation.

This play's oh-too-predictable book is by Michael Stewart and Mark Bramble, with music by Harry Warren and lyrics by Al Dubin. '42nd Street' is replete with well-known songs, including - in addition to the title number - 'You're Getting to Be a Habit with Me,' 'I Only Have Eyes for You,' 'We're in the Money' and 'Lullaby of Broadway.'

As for the plot, Peggy Sawyer (Melissa Lone), from Allentown, Pa., arrives in New York in the middle of the Depression, all fresh-faced and certain she'll immediately get cast in a big Broadway musical. She can dance up a storm, but has never been on stage before.

Naturally, the show that'll put director Julian Marsh (Patrick Ryan Sullivan) back on top just happens to be short one girl for the chorus, and so Peggy is chosen.

The show's star, Dorothy Brock (Lynne Wintersteller), is an aging, fading Big Name whose sugar daddy, Abner Dillon (Lew Lloyd), has backed the production so that his girl can have another hit.

Interestingly, although all the people in the cast groan about how Dorothy can't sing, dance or act, she does a lot of all three, and quite competently!

An accident on stage causes Peggy to bump into Dorothy during the first out-of-town performance. The show must be stopped because Dorothy's ankle is broken. Peggy is fired.

This leaves the production without a leading lady, of course, so the cast persuades Julian to bring Peggy back, because she's the only chorus member with enough talent to take over the leading role in this big musical. She has just 36 hours to learn some ungodly number of pages of dialogue, several songs and lots of dance numbers.

She's a bit nervous about this, but - trooper to the core - she works herself to the point of collapse.

I won't spoil the show by revealing how it ends, but let's just say lots of tapping and arm waving are involved.

It's all very silly, and involves a lot of suspension of disbelief from anyone with even the vaguest inkling of what goes into producing a show, but what the heck: The important thing is getting from one musical number to the next, and everybody does this exceptionally well.

The real star of this show is choreographer Michael Lichtefeld, whose chorus of amazing tap dancers brings down the house with every dance. 'We're in the Money' is particularly wonderful, thanks to Leon Wiebers' gold costumes. The number is such a knock-out that it gets a reprise during the curtain call.

It's no surprise that Sullivan, making his Music Circus debut as Julian, is such a strong character; he played the role on Broadway and in a national tour of the show. He looks every bit the way we expect a Broadway producer to look.

Lone, returning from three years on Broadway to play Peggy, is an amazing dancer; she effortlessly handles the transition from uncertain ingenue to star.

Wintersteller was last seen on the Music Circus stage being dragged around as Kate in 'Kiss Me Kate.' The hard part here is picturing her as a has-been, although she plays the diva role convincingly.

The supporting cast is outstanding. Zachary S. Berger, as the tenor Billy Lawlor, has a fresh, earnest face; he reminded me of Dick Powell, whom I later realized had played the role in the 1933 film. Berger is an equally talented dancer, and he acts the role with a flair.

Maggie - one of the writers of 'Pretty Girl,' the show within a show - is played by Susan Cella, who makes a big impact.

With terrific dancing, familiar tunes and a predictable plot line, '42nd Street' is good, old-fashioned fun. It's a great way to cap off Music Circus' 60th season.
Posted by Bev Sykes at 1:09 PM