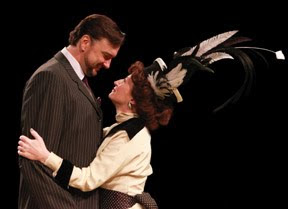 I'm not sure whether actress Vicki Lewis channeled Fanny Brice or Barbra Streisand during Tuesday's opening performance of the Music Circus production of “Funny Girl,” but whatever she did, it worked for her.

“Funny Girl” is so closely identified with Streisand — who played the role of stage and screen star Fanny Brice for 1,348 performances on Broadway, and in the subsequent film adaptation — that it never has had a Broadway revival.

The show was nominated for eight Tony Awards, including best musical and best composer and lyricist (Jule Styne and Bob Merrell).

The 1968 film was nominated for eight Academy Awards, including best picture, and Streisand took home the Oscar for her performance.

In this Music Circus production, directed by Glenn Casale, Lewis manages the seemingly impossible task of evoking Streisand, in both voice and mannerisms, and yet somehow making the role her own.

And it's a huge role, in which Lewis sings 14 of the 19 songs. She can belt out a number like “Don't Rain on my Parade” with gusto, yet be touchingly vulnerable in songs such as “People.”

The semi-biographical plot, told in flashbacks, is based on Brice's life and career. With the help of her dance instructor, Eddie Ryan (Michael Patternostro), she lands a gig at Keeney's Music Hall, where her debut as a roller-skating chorus girl turns her into a major star overnight.

It's a quick step to an audition with Broadway impresario Florenz “Flo” Ziegfeld (Ron Wisniski), and a leading role in the famed Ziegfeld Follies.

Meanwhile, Brice falls in love with a handsome entrepreneur and gambler, Nick Arnstein (Brad Little), who makes his living on luck.

Eventually abandoning her Broadway career for love, Fanny and Nick settle down in the country to raise a family. Unhappily, things take an unexpected turn for the worse before too long: Nick's luck suddenly runs out, forcing Fanny to make an unexpected comeback to the stage.

Brad Little, well known for his performance in “Phantom of the Opera” — and Music Circus performances as the lead in “The Scarlet Pimpernel” and Javert in “Les Miserables” — is a wonderfully suave, debonair Arnstein. He's a playboy, gambler and con-man, and his ruffled shirt is a subject of much comment on their first meeting.

Nick's duet with Fanny — “You Are Woman, I Am Man” — is outstanding.

Fanny's mother (Alix Korey) and her three card-playing friends — Mrs. O'Malley (Kim Arnett), Mrs. Meeker (Jennie Scott) and Mrs. Strakosh (Helen Geller) — are wonderful as stereotypical New York housewives who share information on everybody's business, and try to top each other with the accomplishments of their own children.

Wisniski gives a solid performance as the beleaguered Ziegfeld, who isn't quite sure what to make of his unusual new star. But he's too much of a showman, recognizing the extent of her talent, to fight her all that much. He evolves, over time, into more of a father figure.

Patternostro gives a noteworthy performance as Eddie, and gets a chance to shine in his own number, “Who Taught Her Everything,” which celebrates Brice's success.

Bob Richard choreographs some stylish dance numbers. The Keeney Music Hall “Coronet Man” and the Follies finale, while short on women, echo the production numbers we identify with Ziegfeld.

Marcy Froehlich has designed some grand costumes, from the over-the-top Follies girls' outfits and colorful trumpet dance finery, to the muted browns and golds of Fanny's Henry Street friends and neighbors.

Done well, “Funny Girl,” is an enjoyable show ... even without Streisand in the lead.

When one has a leading lady as strong as Lewis, the result is a very satisfactory evening indeed.
Posted by Bev Sykes at 7:10 PM