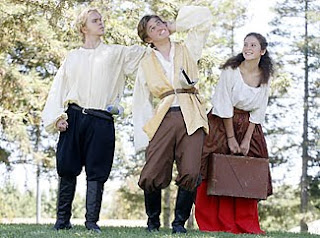 Summer marks the time when the oldest Acme performers must move on to college, and the local theater company brings in a crop of newbies.

Such transitions sometimes can be felt for a show or two, before the fresh faces properly hone their acting chops and blend in with the group.

Not so this time.

Whether the new kids on the block are exceptionally talented, or playwright Ken Ludwig's zany adaptation of Alexander Dumas' 'The Three Musketeers' is a perfect selection for a mixed group of experienced and less experienced young actors, the end result is an absolute delight ... and a marvelous way to close Acme's 30th anniversary season.

This show is fresh. It's fast-paced. It's funny.

And it's modern, with a fifth musketeer - D'Artagnan's sister - thrown into the mix.

What's not to like about a show heavy on swordplay? (I counted 19 sword fights in two hours!) Acme alum and professional fight choreographer Dan Renkin flew in from New York for a week, to build and polish the fights.

His efforts paid off: The kids obviously had a marvelous time on the Veterans' Memorial Stage opening night, engaging in each skirmish with considerable gusto.

Delany Pelz and Alex May's lighting design greatly enhances the production. Hannah May and William Delacorte's set is minimal - a platform makes a sweeping arc around the stage - and so the lighting assumes even greater importance. The first appearance of the original three musketeers, silhouetted against a white backdrop, is extremely dramatic.

The cast includes some particularly good performances, starting with Jeremy Reinhard's Cardinal Richelieu, looking for all the world as if he just stepped out of some 17th century painting. Reinhard makes an excellent villain, as does his partner in crime, Milady (Hope Raymond), who revels in all her delicious wickedness.

Zach Salk also is wonderfully campy as King Louis XIII, pawn of Richelieu, who seems terribly inept and better suited to planning the castle meals than mounting any sort of attack.

The Musketeers give strong and individual performances. Andrew Lampinin is Athos, hiding a deep dark secret. Torin Lusebrink is Aramis, who believes that the ties of friendship are paramount. Antonio de Lorea-Brust is Porthos, the group's extrovert.

Matt Gibson plays D'Artagnan, raised by his father (Sam Wheeler) to be a musketeer, and now headed to Paris to join this select band. D'Artagnan also is placed in charge of his sister Sabine (Gigi Gilbert-Igelsrud), who is to be deposited in a Parisian convent.

Sabine, however, has other ideas. Apparently she's as good a swordsman as her brother - if not better - and isn't about to settle for being locked in some dull convent.

In the minor role of an innkeeper, Alex Clubb has a wonderful scene that I won't spoil by describing. It's a standout moment.

Kudos to Hope Raymond and Alix Miller on the gorgeous costumes, which go far beyond what one would expect from a company of young people.

This rambunctious 'Three Musketeers' is a huge undertaking, with more than 30 actors, a dozen different settings and almost 100 crucial props. And those great sword fights.

Congratulations to the entire cast, on a job well done ... and to Renkin, for helping make a crucial element truly outstanding.
Posted by Bev Sykes at 4:49 PM