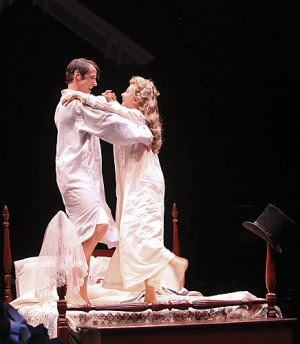 In 1966 Tom Jones and Harvey Schmidt (the guys who wrote “The Fantasticks”) wrote a little two-person show to celebrate marriage. It was based on the Jan de Hartog play, “The Fourposter” and was called “I Do! I Do!” It starred Mary Martin and Robert Preston. The show ran for 560 performances and received seven Tony nominations, including the Best Actor award for Preston.

It was revived in an off-Broadway production in 1996 and has become popular with regional theaters, including 22 years (7,645 performances) at the Chanhassen Dinner Theater in Minnesota, from 1971 to 1993 (the actors who starred as the married couple through the run of the show, got married themselves 18 months into the production).

The story consists of a series of vignettes following Agnes and Michael from their wedding in 1898 through their 50-year marriage until they leave their family home in the 1940s.

Playing Michael and Agnes in this production are real man and wife (of 24 years) Matthew Ashford and Christina Saffran Ashford, both of whom have lengthy Broadway and off-Broadway credentials (Matthew will be familiar to soap opera fans as Jack Devereaux in NBC’s “Days of Our Lives.”) Both give excellent performances, he as the self-absorbed aspiring writer, she as the long-suffering housewife and mother, though the love for and care about each other shines through any slight negativity that may rear its ugly head.

The story begins on the wedding night for the virginal couple, dealing with “first time” jitters, handled adroitly and without need for explanation with the two songs “Goodnight” and, after a brief blackout, the exuberant “I love my wife.”

Then, in quick succession the couple go through pregnancy, birth, another birth, infidelity, the empty-nest syndrome, marriage of their children, Agnes’ “finding herself” and the continuing advancement into their older years.

Scenic designers Scott Klier and Jamie Krumpf, costume designer Leon Wiebers, and director Will Mackenzie have worked together beautifully to get the actors from their youth to their old age, with most costume changes occurring in view of the audience, through use of several interesting devices. Costumes which are able to morph into other costumes with the addition or subtraction of a coat or scarf, and all in complementary colors work to achieve the desired effect. The final transition is particularly clever.

While in general the music, though pleasant, isn’t anything special, there are a couple of stand-out numbers. One is the song which became a popular hit, “My cup runneth over.” But lesser known songs would include the energetic “Flaming Agnes,” as Agnes defiantly dons an expensive feathered hat and begins to feel her oats.

Another would be the more quiet, reflective, and sweet “Where are the snows?” as the couple begins to settle into middle age. And you can’t forget “When the kids get married,” which has Agnes playing the violin and Michael playing the trumpet (both badly) as they celebrate the approaching empty nest and what they will do when they have it.

“I Do! I Do!” looks at an idealized view of marriage, one which has its ups and downs, but no real external problems (they seem to have enough money, the kids don’t seem to cause many problems, nobody has substance abuse problems — this is no “Who’s Afraid of Virginia Woolf”).

If there is a message here, it is that “marriage is a very good thing, though it’s far from easy.”

Labels: "I Do I Do", Music Circus, musical, Sacramento